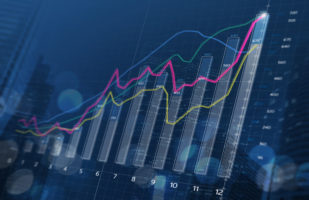 October 26, 2020 – Robert Half International Inc./(NYSE:RHI) posted third quarter revenues of $1.19 billion, down 23.3 percent from the same period a year ago, surpassing the consensus mark by 2.48 percent. The company has topped consensus revenue estimates three times over the last four quarters.

The Menlo Park, CA-based recruiting company recorded net income of $46 million, or $.67 per share, compared to the prior year’s third quarter earnings of $224 million, or $1.01 per share.

“We are very pleased that third-quarter and early October results reflect consistent weekly and monthly sequential gains across our divisions,” said M. Keith Waddell, president and CEO of Robert Half. “Protiviti had another outstanding quarter, reporting its 12th consecutive quarter of year-on-year revenue gains, leveraging a strong pipeline of diversified services offerings, including particularly robust growth from the blended solutions with our staffing operations.”

“We were also pleased with the quarter-on-quarter growth in our staffing divisions, led by our permanent placement and office team divisions,” Mr. Waddell said. “Return on invested capital for the company was 25.8 percent in the third quarter.”

Mr. Waddell noted sequential gains in prepared comments and struck a positive note in a conference call with analysts. “While uncertainty remains in the overall economic environment as the pandemic continues, there is much to be optimistic about,” he said. “As the fourth quarter progresses, the nature, timing and amount of any additional fiscal stimulus should be known. Medical solutions to the COVID-19 virus move ever closer to reality, and the NFIB continues to report improving trends in the small business community.”

Korn Ferry Posts Flat Year-End Revenues; Q4 Down 10.2 Percent
Korn Ferry (NYSE:KFY) has posted 2020 fiscal year-end revenues of $1.92 billion, flat from a year ago. The Los Angeles-headquartered executive recruiter and leadership consultant – the largest globally and in the Americas as ranked by Hunt Scanlon Media – also reported fourth quarter revenue of $490.8 million, a decline of 10.2 percent. The firm reported restricting charges of $40.5 million in its fourth quarter. Net income attributable to Korn Ferry was $104.9 million in the 2020 fiscal year, while the firm reported a net loss on $0.8 million in Q4.