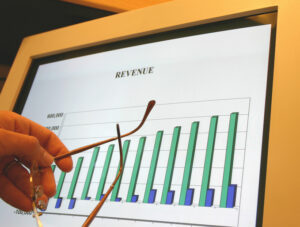 October 25, 2021 – Robert Half International Inc./(NYSE:RHI) posted third quarter revenues of $1.190 billion, a 44 percent increase from the same period a year ago, surpassing the consensus mark by four percent. The company has topped consensus revenue estimates five times over the last five quarters. Robert Half came out with quarterly earnings of $1.53 per share, beating the Zacks Consensus Estimate of $1.40 per share. This compares to earnings of $0.67 per share a year ago. These figures are adjusted for non-recurring items.

“We once again achieved a record level of both revenues and earnings in the third quarter, exceeding the high end of our guidance, as a result of continued broad-based acceleration in the demand for our staffing and business consulting services,” said M. Keith Waddell, president and CEO of Robert Half. “Our permanent placement and Protiviti operations continued to show very strong results, growing year-over-year revenues by 79 percent and 56 percent, respectively.”

“Our temporary and consultant staffing operations also accelerated in the quarter with year-over-year revenue growth of 35 percent,” Mr. Waddell said. “Overall, our total revenues were 10 percent higher than the pre-pandemic third quarter of 2019. Return on invested capital for the company was 53 percent in the third quarter.”

The quarter had 64.4 billing days, compared with 64.3 in the year-ago quarter. At present, Robert Half operates 321 staffing locations worldwide, with 85 locations situated in 17 countries outside the U.S.

Protiviti recently acquired Identropy, a security consulting firm that specializes in advisory, implementation and managed services for identity and access management (IAM) and access governance solutions. With this acquisition, Protiviti strengthens its ability to meet the growing need to combat data breaches and provide clients with pragmatic and innovative IAM services.

“Identity has become the new technology perimeter for today’s business technology solutions and digital transformation. Yet, IAM projects are often overly complex and mired in point solutions when a holistic platform solution would serve them better,” said Ron Lefferts, managing director and global leader of technology consulting firm Protiviti. “The combination of Identropy and Protiviti’s extensive knowledge and expertise will help corporate security teams that are already stretched thin to simplify, fortify and run their identity programs effectively.”

Robert Half shares have added about 74.9 percent since the beginning of the year versus the S&P 500’s gain of 20.8 percent. The company’s shares have appreciated 96.5 percent over the past year, significantly outperforming the 65.8 percent growth of the industry it belongs to.