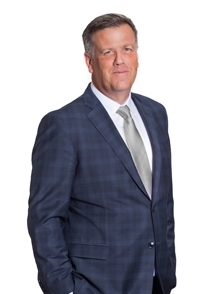 Jeff Forbes is President and a Managing Partner with KBRS. Over the past 21 years, he has successfully completed hundreds of searches, recruiting outstanding executives and senior leaders for a wide spectrum of public and private organizations – from regional start-ups to crown corporations to multi-billion dollar organizations.

Jeff plays an active role in the firm’s executive search practice, leading game changing search assignments. His extensive knowledge of industry, the region, the labor market, along with his ability to match skills with requirements, has earned Jeff a highly loyal and impressive list of clients. They continue to look to him for the expertise they need to stay competitive.

Jeff also plays an instrumental role in the leadership of the firm’s growing HR consulting and career transition practices and is one of the three owners of The Robertson Surrette Group.

Long active in the community, Jeff is currently a member of the Board of Directors for the Dartmouth General Hospital Foundation, Canadian Cancer Society of Nova Scotia, Events East Limited, which operates Scotiabank Centre and the new Halifax Convention Centre. He has served on a number of other boards over the years, including Art Gallery of Nova Scotia and the Advisory Board to the Dalhousie School of Medicine. Jeff was involved with A GREATER Halifax 2011-16 Economic Strategy and has been extensively involved with the Halifax Chamber of Commerce, beginning in 2005 when he joined the Board of Directors and Executive Committee, and including the role of Chair for the Board of Directors in 2010. He also led the Human Resources and Governance Committee to implement the Chamber’s first CEO Assessment process as well as its first board self evaluation program.

Jeff has helped raise vital funding and awareness for such community organizations as the Sunshine Foundation, the IWK Health Centre, the Black Business Initiative and the Metro Food Bank. He has participated in the Fusion Halifax’s Mentorship Program, and Nova Scotia Business Inc.’s “Connect Nova Scotia” mentoring program for entrepreneurs.

Before joining KBRS, Jeff earned a Bachelor of Commerce degree from Dalhousie University and held a series of sales management positions with one of Atlantic Canada’s leading private companies. Jeff has earned his Certified Management Consultant (CMC) designation which is the highest professional standard in management consulting.