Menu
View our Events
Stay Connected:
A survey of 500 CEOs from around the world shows that most know how much culture matters. But one group links culture and strategy and puts people first—and has double the revenue growth of others. Let’s take a closer look. 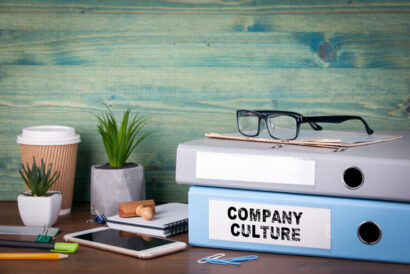 November 17, 2021 – Heidrick & Struggles recently surveyed 500 CEOs at large companies around the world about how they define culture and how it influences financial performance. Findings suggest that most CEOs make culture a priority.

Problem is many are not particularly intentional in their pursuit of culture as a driver of financial performance. The report, which was authored by Heidrick consultants Rose Gailey, Ian Johnston, and Andrew LeSueur, also asked them why and how they work to cultivate their own organizational cultures.

During the pandemic and amid all the other varied challenges 2020 brought to countries, communities, and companies around the world, organizational culture was challenged – and became, for many organizations, the essential glue that held them together. Now, according to the Heidrick & Struggles report as leaders work to maintain resilience in hybrid and fast-changing working conditions, the increased sense of purpose, inclusion, and collaboration that culture nurtures matters more than ever to enable individuals and organizations to thrive.

The connection between financial performance and a thriving culture was complex to make even before the pandemic. Now, with the growing focus on culture as employees return to the office and navigate hybrid work environments, it is more important than ever that companies’ culture efforts create the greatest benefit and highest impact possible.

Heidrick’s survey shows that 82 percent of CEOs said they had made culture a key priority over the past three years, often to improve financial performance. But, when asked about the most important drivers of financial performance, 74 percent picked something else, most often strategy and leadership.

What’s more, Heidrick found a startling disconnection between the elements of culture CEOs think are most important to improving financial performance and what elements actually are most prevalent in their companies today.

One group of survey respondents is more successful in their culture efforts than others. Heidrick calls them the “culture accelerators” because they say that culture is a top-three driver of their financial performance, that it’s very important or crucial to link culture to strategy in order to ensure a positive effect on financial performance, and that they have focused on culture shaping as a key priority over the past three years.

The companies led by culture accelerator CEOs have financial performance (assessed by a three-year revenue CAGR) that’s more than double that of other companies Heidrick & Struggles surveyed: 9.1 percent for this group, compared with 4.4 percent for the others. Coupled with other notable differences described in this report, the data suggest that these CEOs are far more intentional about culture than other leaders.

“They are purposeful in acting on their belief that culture makes a difference to financial performance and start with a direct link between culture and strategy,” the Heidrick report said. “They then focus on building broad engagement by putting people first to ensure that culture has a positive effect on performance. Purposeful leadership and broad engagement are two of the four pillars our work has long shown to be central to shaping cultures. Because thriving cultures will be the linchpin of success going forward, other leaders can benefit from seeing how these leaders have accelerated their approach to culture.”

Organizational culture has become an increasingly high priority for executives in recent years. Even before the COVID-19 pandemic, many executives working to lead in a quickly changing business environment with an evolving talent pool were seeing that a thriving culture could provide a competitive edge in innovation, employee attraction and retention, and agility, among other areas, according to the Heidrick report. Eighty-two percent of CEOs surveyed said they had focused on culture as a key priority over the past three years. They did so for a variety of reasons, with improving financial performance being the most frequent response, followed by increasing employee engagement. 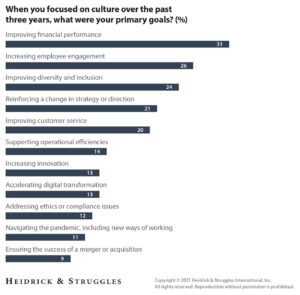 When asked if they had reached their cultural goals, there was marked variation. More than half of respondents met goals such as increasing employee engagement, improving diversity and inclusion, and improving financial performance. But other goals, including reinforcing a change in strategy and addressing ethics or compliance issues, were harder to meet.

Regardless of success in reaching a specific goal, most CEOs, 74 percent, said their employees are mostly or entirely engaged in applying their cultural values in their day-to-day work. Notably, that percentage doesn’t vary much regardless of whether the workforce is working mostly in person (77 percent) or in a more fluid, hybrid working model (73 percent).

What ‘Culture Accelerators’ do Differently

In the wake of COVID-19, broad and lasting changes to the workplace have advanced a more integrated approach to talent management built around culture. Organizations that once synchronized their talent to corporate vision, core values and strategic objectives are now aligning people around purpose. And for good reason: Building sustainable cultures in the long run will attract, engage, and retain talent – and give organizations with strong cultures a key competitive edge.

Eleven percent of the CEOs surveyed led companies in this group. To be included, they had to say that culture was a top-three driver of their financial performance, that it was very important or crucial to link culture to strategy in order to ensure a positive effect on financial performance, and that they had intentionally worked on building and shaping their organizational culture over the past three years. It is notable that the mix of cultural accelerators in terms of region, industry, and size is slightly different than the overall sample, but not statistically significantly different. Thus, this more successful approach to culture shaping is agnostic in terms of geography, sector, and size.

In Heidrick & Struggles’ experience, companies often know they need to align strategy, operating models, and culture, but they don’t know where to start. This isn’t the case with culture accelerator CEOs; only 19 percent said that focusing on operating models was among the top-three positive influences on financial performance, compared to 40 percent of other CEOs. In addition, 48 percent of culture accelerators said they focused on culture to reinforce a change in strategy or direction, compared to only 22 percent of others. Combined with the culture accelerator–led companies’ stronger financial performance, Heidrick says that these findings suggest that starting with culture may be the right first step.

Related: How Search Firms Are Managing the Culture Game

“Culture accelerators more often than others say the aspects of culture that affect financial performance are people related, such as enhancing customer experience and supporting good relationships with external stakeholders,” the Heidrick report said. “And they more often zero in on two elements of culture to create that positive effect: customer and quality focus and collaboration and trust. It’s also notable that, more often than other CEOs, culture accelerators go beyond just saying collaboration and trust are important; they say those qualities are prevalent in their own cultures and then reinforce those qualities by communicating them, both internally and externally.”

In addition, the Heidrick survey showed that 48 percent of culture accelerator CEOs put diversity, equity, and inclusion (DE&I) efforts front and center, compared to 30 percent of other CEOs. This further indicates that, for the culture accelerators, putting people first is more than a platitude; it’s the crux of their approach to culture. And two-thirds of these CEOs also said they completely met or exceeded their culture goals, with 15 percent saying they exceeded those goals, compared to five percent of others.

Within the group of culture accelerators, Heidrick & Struggles dug a level deeper to identify a small group the firm calls “culture connectors.” In addition to having strategic intentionality, these companies have broad engagement with their culture: all leaders said that their employees are mostly or entirely engaged in applying the company’s culture in their day-to-day work. In addition, these companies achieved or exceeded their culture goals.

Managing Corporate Culture Now Means Managing Great Expectations
How work is organized within companies and how employees view their jobs and their relationships to companies is changing. COVID-19 combined with trends that were already taking shape have had a significant impact on employment, recruitment, and retention. These are changes leaders cannot afford to ignore. Here’s the latest insight from international consultant, Mitchell B. Reiss, and Daniel P. Forrester, founder and chairman of THRUUE.

While only 30 CEOs in the Heidrick survey fall into this group, our findings suggest that their organizations focus even more tightly on clear, effective communication, both internally and externally, and that they go the extra mile to engage all their people. This approach appears to be working to their financial benefit: the culture connectors had a higher three-year revenue CAGR than others we surveyed—eight percent compared with 4.8 percent. (While their revenue growth rate was slightly lower than the full group of accelerators, there is a higher share of the very largest companies— those with more than $10 billion in annual revenue—in the culture connectors group.)

Taking a look at how culture connectors have managed to broadly engage their workforce, it seems that including employees at all levels is the first step. Thirty-seven percent of these CEOs said bolstering culture can strengthen financial performance because it encourages people to go beyond what is normally expected.

To do this, two best practices emerged. First, these CEOs said engaging people at all levels of the company is crucial to building culture. Nearly two-thirds of culture connector CEOs who said appreciation and recognition are an element of culture that supports financial performance also said that it’s prevalent in their culture—much higher than the share of other CEOs who said so and 26 percent higher than culture accelerators. What’s more, 30 percent of culture connector CEOs said that challenging employees to be accountable for living the culture is one of the most important ways they can personally ensure their company has a thriving culture, a far higher share than CEOs not in this group.

Second, culture connectors indicated that communicating at scale is also central to success. All culture connectors said holding two-way dialogues with employees about the importance of culture helped promote culture—20 percent more than culture accelerators and more than double other CEOs. Compared to others, culture connectors also hold more large-scale dialogue discussions to develop culture (40 percent versus 24 percent) and look for a variety of ways to understand how employees are feeling, including using sentiment analyses. Perhaps most important, culture connector leaders live the culture; when asked about how they communicate at scale, 80 percent of these CEOs selected “personal commitment to focusing on culture,” compared to 66 percent of culture accelerators and 45 percent of others.

“Amid all the other goals companies have in today’s uncertain world, internal efforts such as culture can sometimes be treated like afterthoughts,” Heidrick & Struggles said. “But our survey shows that companies that link culture to strategy and focus on people first also see better financial performance. Through the course of the year, we will be interviewing CEOs around the world to understand in more depth their different approaches to this crucial aspect of organizational performance.”