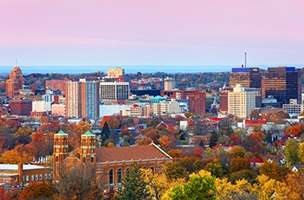 The new chief is expected to be selected next month. Police chief Frank Fowler, who recently announced his retirement, is staying in the position until his replacement is found.

The city’s search committee included representatives from local non-profit groups, individuals who have worked in law enforcement and members of city government, according to the Syracuse Post Standard. The City of Syracuse held 10 community meetings, 36 meetings with stakeholders in law enforcement, government and non-profit groups, and received more than 700 survey responses, the newspaper said.

“The process we’ve followed and input from the community has narrowed the field to three highly-qualified candidates,” said deputy mayor Sharon Owens. “The mayor will continue to listen to input from stakeholders and members of the community in selecting our next chief. He has an outstanding field from which to choose.”

Mr. Afzal has led the Durango police force for about a year and a half, said the Post Standard. Previously, he was with the Arlington (VA) County Police Department for 24 years. Mr. Afzal was a member of that department’s command staff team for 11 years. He also worked in community policing and in gang details.

Mr. Afzal holds a bachelor’s degree in economics from George Mason University and a masters of public administration with a concentration in criminal justice from Troy University in Alabama.

A certified public manager, he attended the Senior Management Institute for Police, the FBI National Academy and the Professional Executive Leadership School.

Mr. Buckner became chief in Little Rock four years ago, said the Post Standard. Before that, he was with the Louisville (KY) Metro Police Department for 21 years, retiring as assistant chief. He earned both his bachelor’s and master’s degrees from Eastern Kentucky University. Mr. Buckner is also a graduate of the National Executive Institute, sponsored by the FBI; Chief Executive Officer Mentoring Program at Cedarville College, sponsored by the National Organization of Black Law Enforcement Executives; and the Senior Executives in State and Local Government, sponsored by the Harvard Kennedy School.

Mr. Cecile has served with the Syracuse Police Department for over 33 years. He has been deputy chief for eight years. He grew up in Syracuse and earned his bachelor’s degree in English literature from Syracuse University.

City of Pasadena Taps Teri Black & Company for Police Chief
Just recently, the City of Pasadena, CA retained Los Angeles-based executive search firm Teri Black & Company to lead its efforts to find a new police chief. The city said it selected the search firm because it has “a very good understanding of our community and organizational culture” from prior engagements.

As first deputy chief, he is responsible for management of all administrative functions of the force and provides oversight of community services, said the Post Standard. Mr. Cecile also supervised and participated in two New York State Accreditation processes for the department.

“In this special and challenging time in American law enforcement history, this is a rare and incredible opportunity to lead the fifth largest law enforcement agency in the State of New York,” said Public Sector Search & Consulting.

With strong civic and community participation, Syracuse wants a police-community relationship that engenders trust, advances community policing, and increases public safety, said the search firm. Syracuse seeks a police chief who is passionate about that mission and enthusiastic about the job opportunity.

Top candidates are expected to have a career history that demonstrates outstanding leadership skills and the ability to embrace and celebrate culture, diversity, community values and all that the City of Syracuse represents, said Public Sector Search. Candidates must also be well-prepared to address an array of operational and policy issues including gun violence, crime reduction, body worn camera implementation, community engagement, police accountability and transparency. The new chief will assume responsibility for bringing a collaborative and strategic focus to a community that is collectively focused on community safety and the police-community relationship.