May 29, 2018 – Perhaps no market is as vibrant, or challenging, for the executive search industry as New York. A decade since the last big recession rocked their world, bankers and other financial industry titans – and the recruiters who serve them – are thriving once again.

But the many other organizations that call the Big Apple home, including giants of the non-profit world, retail, healthcare and media, among others, are also setting the pace for the rest of the country, and the world.

It is often a city of contrasts, where perhaps the world’s greatest newspaper, The New York Times, may prove less valuable than the building it is housed in, and where tech jobs are rapidly growing and yet the area is not a major force in the world of digital media. It’s where fortunes are made, and lost, sometimes in the same week.

New York City is the largest search market on the planet (with London in second place), and it is no wonder. “Frank Sinatra made this phrase famous, ‘If you can make it here, you can make it anywhere,’ and he was definitely on target,” said Alan Guarino, vice chairman at Korn Ferry. “Personally, I have handled work globally and can say that the pace in New York is the fastest in the world,” he noted. “This is where financial markets have been transformed using data, analytics, and disruptive technology. It is also where fashion experts gather each year to see the newest styles. A very high density of executive leaders is here as well as major corporate offices for most global companies.” If you are in New York, he added, “you are almost guaranteed to be in the middle of the action.”

Job growth has been strong nationwide, but in the aftermath of the Great Recession, no sector in New York has been as impressive as the technology industry, which has added thousands upon thousands of new companies and, with them, jobs in New York City and around the state.

But it doesn’t stop there. “New York City is undergoing its largest and longest job expansion since World War II,” said a recent report on New York City employment trends by the New York State comptroller. More than 700,000 jobs have been added during the past eight years (a gain of nearly 19 percent), “pushing employment to uncharted levels,” according to the study.

Andrew Golden, a partner with The Atlantic Group, said he sees that reality virtually every day. “New York City offers massive options for institutional career opportunities in financial services, media, consumer products, real estate, healthcare and other professional services verticals,” he said. These are alongside a burgeoning spike in opportunities for IT and creative roles by way of consulting or contracting as well as through permanent hiring, he added. 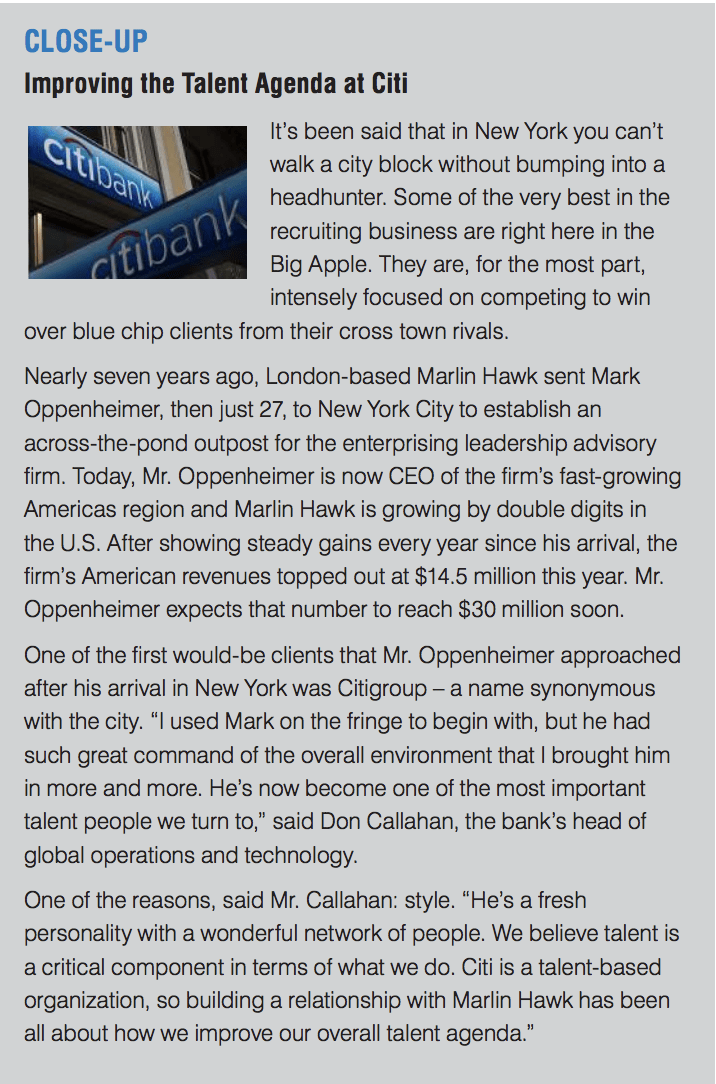 Talent pools are stretched on the employee supply side due to demand from all of the aforementioned business types, he said. Technical analytical skills and expertise in programming, math, data management, accounting, financial planning and ‘systems skills’ are generally in high demand. “Recruiting activity is fervent,” he added, “and it is a challenge just keeping up with the demand for skilled talent.”

Jeanne Branthover, a New York managing partner at DHR International, speaks of the unique diversity of industry sectors that attracts top talent from across the globe when she looks at the New York City business landscape. “Financial services, fintech, technology, E-commerce, digital media, healthtech – it’s all here and growing,” she said. “From start-ups to the leaders in these industries NYC has become the ‘It’ place to be.” Google, Amazon, Bloomberg, ETrade, Buzz Feed, Gilt Groupe, Fresh Direct, Flat Iron Health, JPMorgan, Morgan Stanley – this list goes on, she said. “Whatever industry you’re thinking about, the chances are there is a strong presence here.” And, she added, the candidate pool for talent in New York continues to strengthen as companies continue to hire.

A key area for recruiters, of course, is the financial sector – banking, insurance, securities and real estate. The industry added 6,700 jobs in 2017, including 4,600 in real estate, according to the New York comptroller report. The securities industry, though smaller than before the recession, added 2,300 jobs last year, the fourth straight year of gains. Overall, employment in the finance sector grew by 38,600 between 2009 and 2017, said the report, including 15,700 in real estate, 10,700 in banking and 9,700 in securities. Tellingly, bank profits soared by 28 percent during the first three months of 2018 to $56 billion, according to statistics just published by the FDIC. It was their most profitable quarter ever.

That growth in turn feeds those that provide related services, such as law firms. “New York is a unique recruiting environment for lateral partners for the same reason Willie Sutton robbed banks – it’s where the money is,” said Jon Lindsey, partner at Major, Lindsey & Africa. “As the nation’s financial center and home to major investment banks, hedge funds and private equity funds, New York gets the lion’s share of the legal work they generate.” Much of it, he noted, is premium work at premium billing and realization rates.” It is work that every top tier law firm covets, so the competition is fierce.”

One search firm to enjoy the benefits of New York’s jobs growth – and to add to its clients’ and the city’s success – is London-based Marlin Hawk, which opened a U.S. office in midtown Manhattan in 2011. Led by Mark Oppenheimer, CEO of the Americas region, Marlin Hawk recruits top talent for a number of outstanding blue chip companies across the financial, industrial and technology sectors. The firm is also becoming known as the go-to firm in tangential service offerings like organizational analysis, compensation benchmarking, micro intelligence, leadership benchmarking, interim management, succession planning and nearly all aspects of talent planning and candidate pipelining.

Its clients, meanwhile, include an array of blue chip companies, a number of them practically synonymous with New York City, including Citigroup, Bank of New York Mellon and Goldman Sachs. [See related Sidebar]. “To do what we do,” said Mr. Oppenheimer, “we need the best and the brightest. We need people who are willing to repudiate all the traditional ways of doing things while considering new pathways forward. Innovation is our culture and our ethic.” It is that kind of ethos that New York will always embrace. 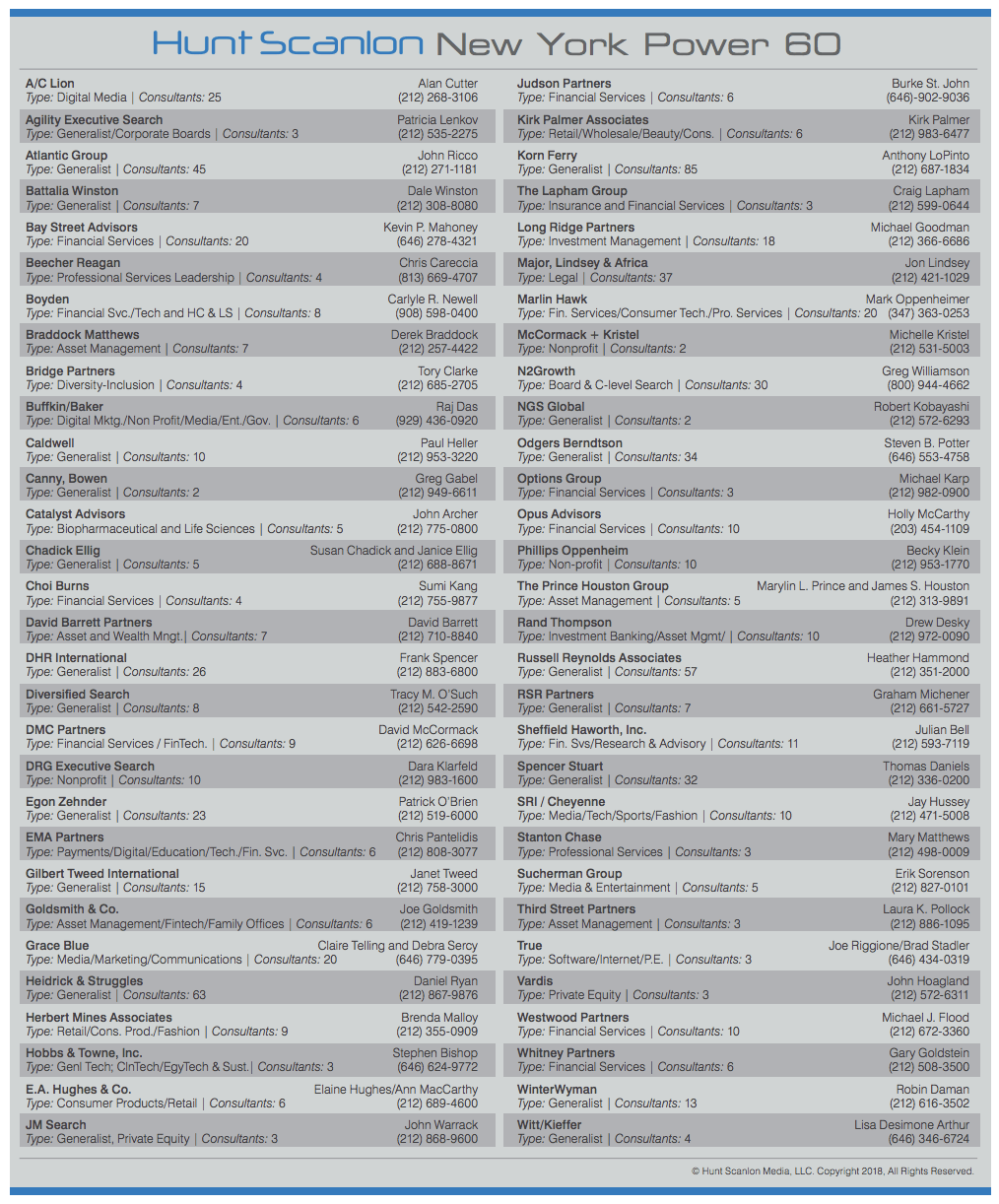