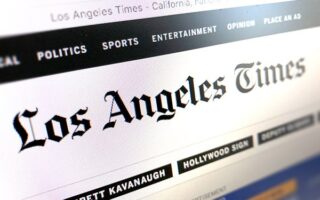 May 10, 2021 – Koller Search Partners has placed Kevin Merida as executive editor of the Los Angeles Times, which continues its revival under the ownership of biotech entrepreneur Patrick Soon-Shiong and his wife, Michele. Leading the assignment for the search firm was Karen Danziger. The newspaper’s previous top editor, Norman Pearlstine, stepped down from the role in December and now serves as senior advisor to Dr. Soon-Shiong, executive chairman. “We are elated to welcome Kevin to the Los Angeles Times,” said the couple. “Kevin possesses a clear understanding of the rigor necessary for independent journalism and how to translate that journalism to multiple platforms. He also shares our passion for the unique opportunity we have to build the LA Times into a media enterprise with a distinct West Coast point of view.”

Mr. Merida has served as a senior vice president at ESPN and editor-in-chief of The Undefeated, a multimedia platform that explores the intersections of race, sports and culture, since 2015. Under his leadership, The Undefeated launched within and expanded across the Walt Disney Co. with a content portfolio that includes award-winning journalism, documentaries and television specials, music videos and albums, live events and digital talk shows, and two bestselling children’s books. During his tenure at ESPN, he also oversaw the investigative/news enterprise unit, the television shows “E:60” and “Outside the Lines,” and chaired ESPN’s editorial board.

“I am excited to be the next executive editor of the LA Times, and will bring with me an open heart, a penchant for experimentation and a fiercely competitive spirit,” said Mr. Merida. “Looking forward to partnering with new colleagues and soaring to greater heights together.

Currently based in Washington, D.C., Mr. Merida will relocate to Los Angeles and officially assume his role at the Los Angeles Times in June, when he’ll become the 19th editor of the 139-year-old news organization. As executive editor, Mr. Merida will be responsible for identifying and developing additional platforms and products under the LA Times umbrella.

“The Los Angeles Times has consistently produced ambitious journalism and is one of the few counterpoints to the East Coast-centric news media in the national conversation,” said president and chief operating officer of the Los Angeles Times, Chris Argentieri. “We’re honored to welcome Kevin to Los Angeles where he’ll help lead the continued transformation of the Times.”

Prior to joining ESPN, Mr. Merida worked for the Washington Post, beginning in 1993, and held a variety of roles, most recently as managing editor for news, features and the newspaper’s universal news desk. During his tenure as managing editor, he helped lead the Washington Post to four Pulitzer Prizes, and the newspaper embarked on a digital transformation that made it one of the fastest growing news organizations in the country.

Founded in 1881, the Los Angeles Times is the largest metropolitan daily newspaper in the country, with a daily readership of 1.2 million and 2.1 million on Sunday, more than 32 million unique latimes.com visitors monthly and a combined print and online local weekly audience of 4.4 million. The newspaper has won 47 Pulitzer Prizes, co-produces an Emmy-winning daily television news magazine, creates and distributes a variety of successful podcasts, and presents a range of live events as an extension of its journalism.