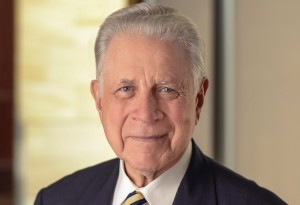 Gerard R. Roche, arguably the best known recruiter in the history of executive search, will announce later today his retirement from Heidrick & Struggles. Mr. Roche, 84, will officially step down at the end of the year and will retain the title of chairman emeritus. In a career spanning more than five decades, Mr. Roche specialized in CEO recruitment— many say he pioneered it — for some of the largest companies in the world.

But Mr. Roche might best be remembered for a search he conducted 22 years ago with his longtime rival, Thomas J. Neff, of Spencer Stuart. In an effort to broaden the field of candidates for the open CEO post at IBM, James E. Burke, chairman of the search committee, teamed up ‘Tom & Gerry’ to handle the assignment.

The controversial idea to join two rival recruiters was also devised to sidestep search industry off-limits guidelines. The plan prevailed and Louis V. Gerstner Jr. — one of Mr. Roche’s candidates — walked away with the job. Messrs. Roche and Neff competed head-to-head for many top assignments for years to come, but the two would join forces professionally just one other time.

When once asked to pick his most important CEO placement, Mr. Roche said that to do so would be like choosing which child was a favorite. Nevertheless, as the years went on it became clear that his recruitment of John Sculley to Apple was, in fact, his favorite. It was a hallmark assignment that set a new high bar for Mr. Roche — and set standards of excellence for an entire industry that was also upping its game.

Mr. Sculley, at first glance, seemed an unlikely choice. He was a top executive at PepsiCo, and far from a technology expert. But Mr. Roche instinctively knew that Apple needed a fresh perspective and that skills honed in one industry could, in fact, transfer to another. It was a game changing approach to CEO recruitment.

“I was taking someone who was selling soda pop to selling computers,” said Mr. Roche in an interview last year with Executive Search Review.  “But Steve Jobs told me very specifically that he wanted someone who understood consumer marketing because that’s where computers were going.”

In the 1970s Mr. Roche began a long association with Jack Welch who later became the legendary CEO of General Electric. “At the time, Gerry was conducting a mid-market CEO search,” Mr. Welch said in an Executive Search Review interview last year. “I was very comfortable with him and liked him a great deal.” Several years later Mr. Roche was retained by Allied Chemical to search for its new CEO and again turned to Mr. Welch as a possible candidate. “Gerry did not persuade me to leave GE but my trust in him was well-placed as there was never a rumor about my leaving.”

The two ultimately worked in partnership when Mr. Welch announced his own retirement from GE. But there was a twist: In a process to name his successor, Mr. Welch brought in both Mr. Roche and Mr. Neff to assess GE’s three internal CEO candidates: Jeffrey R. Immelt, James McNerney and Robert Nardelli.

Mr. Immelt got the nod — and it was left to Mr. Roche to handle the delicate placement of the two not chosen. Mr. Roche had two plum CEO openings on hand, one at 3M and the other at Home Depot. Mr. McNerney quickly took one, Mr. Nardelli grabbed the other. Mission accomplished.

Mr. Roche joined Heidrick & Struggles in 1964 when then-CEO, Gardner Heidrick, recruited Mr. Roche from Kordite, a plastics manufacturer, to lead the firm’s fledgling New York office. In 1999 he was named “Recruiter of the Century” in a Hunt Scanlon poll of several thousand industry peers.