Stay Connected:
U.S. businesses report strong hiring intentions, according to the latest “Employment Outlook Survey” by ManpowerGroup. Let's go inside the latest forecast and see which sectors and regions are in growth mode. Search expert Todd Bennett then weighs in. 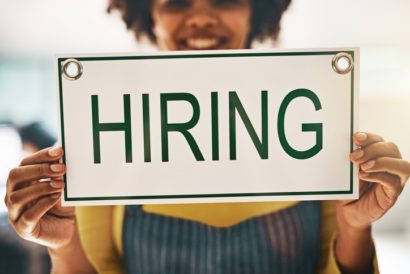 March 12, 2019 – U.S. employers are expecting hiring to pick up in the second quarter, with 24 percent of employers planning to add staff, according to the latest “Employment Outlook Survey,” released today by ManpowerGroup. Employers in all U.S. regions and industry sectors are looking for headcount to grow. This is the seventh consecutive year of double-digit hiring outlooks in the U.S., according to the survey of more than 11,500 U.S. employers

Employers in all four regions in the U.S. showed a positive outlook for the coming quarter. In 24 percent of Midwest businesses surveyed, employers expect to increase staffing levels during the April to June time frame, with three percent expecting to trim payrolls and 72 percent anticipating no change. Financial Activities sector employers in the Midwest report moderately stronger hiring plans when compared with the previous quarter. Employers in five Midwest industry sectors report relatively stable labor markets when compared with the first quarter of 2019: construction, education and health services, nondurable goods manufacturing, other services, and wholesale and retail.

Employers in 23 percent of Northeast businesses surveyed anticipate payroll gains during the second quarter of 2019, while three percent expect to trim staffing levels and 73 percent expect no change. Labor markets remain relatively stable in six of the Northeast’s industry sectors in comparison with the first quarter of 2019: construction, financial activities, government, nondurable goods manufacturing, transportation and utilities, and wholesale and retail trade.

In the South, employers in 23 percent of the businesses surveyed expect to add to payrolls during the next three months, with three percent of employers expecting to decrease staffing levels and 73 percent expecting no change. Employers in three of the South’s industry sectors report a slightly stronger hiring pace when compared with the first quarter of 2019: information, leisure and hospitality, and other services.

Employers in 25 percent of businesses surveyed in the West expect workforce gains in the coming quarter, while three percent expect to trim payrolls and 70 percent anticipating no change. In five industry sectors across the West, employers report relatively stable hiring opportunities in comparison with the previous quarter: construction, education and health services, financial activities, professional and business services, and wholesale and retail trade. 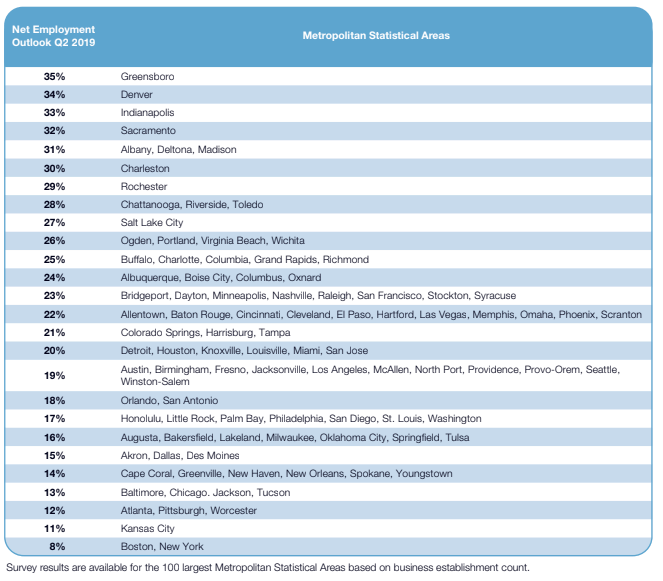 ManpowerGroup interviewed over 59,000 employers in 44 countries and territories to forecast labor market activity from April to June 2019. All participants were asked, “How do you anticipate total employment at your location to change in the three months to the end of June 2019 as compared to the current quarter?”

The ManpowerGroup research for the second quarter of 2019 reveals that employers expect to add to payrolls in 40 of 44 countries and territories in the period up to the end of June. Employers in 15 of 44 countries and territories surveyed report stronger hiring plans when compared with the prior quarter, while weaker hiring intentions are reported in 18 and no change is expected in 11. When compared with the second quarter of 2018, outlooks improve in 13 countries and territories, but decline in 27 and are unchanged in four. The most positive hiring sentiment is reported in Croatia, Japan, Greece, the U.S., Hong Kong and Taiwan, while the weakest labor markets are expected in Argentina, Hungary, Spain and Turkey.

An increase in payrolls is forecast for 23 of 26 European, Middle Eastern and African (EMEA) countries during the second quarter, while flat hiring activity is forecast for three. Hiring intentions improve in 10 countries when compared with the previous quarter, but decline in eight. In comparison with this time one year ago, employers report stronger hiring plans in 10 countries, but outlooks weaken in 15. Croatian and Greek employers report the strongest hiring prospects for the coming quarter, while the weakest labor markets are forecast for Hungary, Spain and Turkey.

Related: Top 5 Reasons Why the Job Market will Flourish in 2019

ManpowerGroup found that employers in nine of the 10 Americas countries surveyed expect to add to payrolls in the next three months, with a flat labor market forecast in one country. In a comparison with the prior quarter, hiring prospects improve in three countries, while declining in six. When compared with this time one year ago, hiring plans strengthen in one country, but weaken in eight. The most optimistic hiring intentions are reported in the U.S. and Mexico, while Argentinian and Panamanian employers report the weakest outlooks.

“Coming off the most competitive hiring quarters I have seen, it is hard to imagine the climate getting even more competitive, but I have yet to hear from a client who does not have pronounced needs to add talent to critical positions still this year,” said Todd Bennett, CEO of Fort Worth, TX-based R. Todd Bennett Retained Executive Search.

“The dirty little secret in the recent jobs report, the 3.4 percent increase in hourly wages, pales to the increase in VP and C-level increases we have seen going back to 2018,” he said. “Having a strong executive search partner that can position a client in the market to win talent is essential now more than ever, especially with many candidates seeing multiple opportunities at once.”