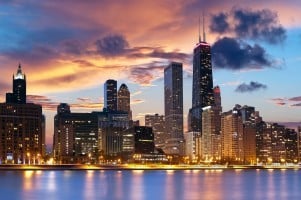 June 8, 2014 – Next to New York and London, Chicago and its surrounding environs – commonly referred to as “Chicagoland” – has thrived for decades as one of the most important global recruiting hubs in the talent acquisition field. But an unusual and fairly recent confluence of factors is making it a true standout in the ever-expanding race to find a new generation of corporate leaders. Hundreds of recruiters, specializing in every conceivable sector and industry function, now call Chicago home. Based on interviews with local talent acquisition professionals and executive recruiters located throughout the city, Hunt Scanlon Media has assembled “Chicagoland Top 40” – an assemblage of Chicago’s best rated talent firms based on local market reputation.

Not surprisingly, four of the nation’s “Top 10” talent providers – Spencer Stuart, Heidrick & Struggles, DHR International and Witt/Kieffer – are headquartered here, underscoring the importance of Chicago’s central location in North America. The city acts as a key bridge between New York and London to its east, and the U.S. West Coast and Asia to its west. For years Chicago has been a melting pot of industries, known as a nerve center for manufacturing and industrial conglomerates as well as private equity firms and financial institutions. Northern Trust and Discover set up large corporate headquarters here years ago, and Kraft, Sears, Allstate, McDonalds, Sara Lee and numerous other Fortune 500 companies have been here for ages. Foreign companies have been lured here, too: those with a major presence in Chicago include Unilever, BMW, AON and Nestle.

But aside from its critical location and traditional business base, Chicago’s growing status as a world class talent hub is the result of a hiring boom at both ends of the talent spectrum: young, up-and-coming technologists who see the world, from their perch in Chicago, in distinctly unrestricted ways and aging baby boomers seeking second or third careers – and financial planning advice as they advance.

First up, the technologists: In the last five to 10 years the city of Chicago has made a big push to attract technology firms. Groupon set up shop here in 2010. Since then hundreds of small tech start-ups have marched in – last year alone a record 193 tech companies were spawned in and around Chicago (five times as many as in 2008) – updating Chicago’s famous moniker to one better suited to the 21st century: Silicon Prairie. For executive recruiters based here it has meant a boom in business. Then there are the aging baby-boomers – many searching for new career opportunities, and investment guidance. “There is a significantly large population of baby boomers in the Midwest beginning to age now,” said Geremy Cepin, president of Koltin Consulting Group, a search firm specializing in financial services. According to Mr. Cepin, investment advisers like Chicago-based Cetera are addressing their needs in the form of private wealth and estate planning services to meet demand, while a new wave of financial providers is leveraging growth in this sector while tending to the younger generation’s fiscal needs.

It all means one thing for talent management professionals based in Chicago: more business. And as Chicagoland companies build out their management ranks the need for more than just recruiting services is on the rise. Succession planning advice is on the upswing, and many companies, logically, are turning to their search providers for counsel. Recruiting firm James Drury Partners is one such outfit helping companies beyond their recruitment needs. “We are literally living in this space,” said firm president and founder, James Drury, who said his firm is working with at least 20 Chicago-based clients whose boards are engaged in all sorts of succession initiatives. Mr. Drury predicts his firm’s board practice will double this year alone.

All this makes Chicagoland one of the fastest growing recruiting regions anywhere. Scores of recruiters have moved in since the downturn of 2007-2008, and these consist of boutiques and specialists too voluminous to list. But a number of them made this year’s Chicagoland ranking, including two Russell Reynolds Associates’ spinoffs – HR function specialist Hanold Associates and medical technology sector specialist One80 ° – and Cavoure Partners, founded by former recruiters from Russell Reynolds Associates, Boyden and Heidrick & Struggles. Firms that have maintained headquarters here, and that are nationally recognized as part of this year’s “Top 40” ranking, include CFO and small-cap CEO specialist Crist | Kolder Associates, C-suite recruiters Ferguson Partners, legal search providers Major, Lindsey & Africa, industrial and consumer products specialist North Line Partners, and generalists Daubenspeck and Associates, Kensington International, Reilly Partners, and Slayton Search Partners. 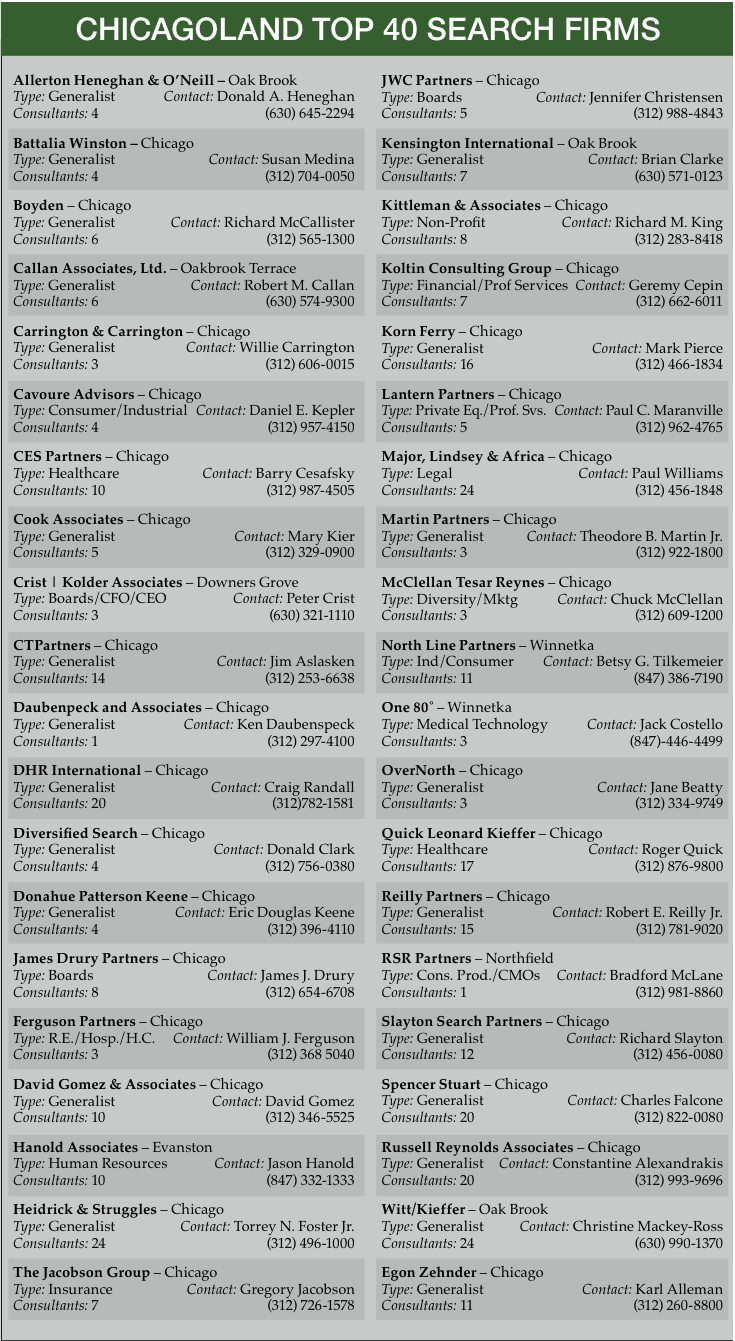