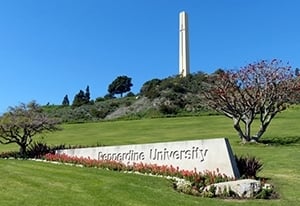 “I look forward to Sean’s stewardship of the Pepperdine brand and story and am energized by the knowledge and experience he brings from his years of leadership in strategic communications, organizational development, and advancing invaluable opportunities in the fields of healthcare and higher education,” says university president Jim Gash.

Mr. Burnett joins Pepperdine with more than 20 years of experience in brand management and strategic planning, serving most recently as vice president of marketing and corporate affairs for the Gulf Coast division of HCA Healthcare, a leading provider of healthcare services.

In addition to his corporate roles, Mr. Burnett served as director, MBA programs at the Jones Graduate School of Business at Rice University, where his efforts helped elevate Rice’s national ranking from 49th to 22nd in two years. Additionally, the Jones School’s entrepreneurship and finance programs became ranked in the top 10 internationally for the first time in the school’s 35-year history.

Mr. Burnett received his MBA from Rice University and his bachelor’s degree in advertising from the University of Texas at Austin. He also serves as president of the board for Cornerstone Christian Academy, a K–8 school in Sugar Land, TX.

Pepperdine University is founded on the Church of Christ tradition and upholds Christian values with the belief that they complement and support the pursuit of knowledge. Situated on a 830-acre campus in Malibu, CA, Pepperdine regularly ranks among the top 20 most beautiful college campuses in the US. There are four additional campuses throughout Southern California and seven permanent campuses around the globe that provide a range of international internships and programs on six continents. With 82 degree programs, Pepperdine boasts top-ranked graduate and undergraduate programs in schools dedicated to business, education and psychology, law, liberal arts, and public policy. Its NCAA athletic program is composed of eight men’s and nine women’s Division I teams.

How Culture Impacts an Organization

In this brand new episode of ‘Talent Talks,’ Rob Adams is joined by Chris Guiney, a partner at CarterBaldwin Executive Search. Here, Mr. Guiney discusses the topic of culture and its impact on organizations. He also examines how the culture of private equity firms differs from non-profit organizations and then closes by discussing the future impact of culture and DE+I initiatives. Listen Now!

The selection of a vice president for community belonging and chief diversity officer is one in a series of initiatives that the university has been implementing to build and model “a diverse, informed, loving, and unified community” at Pepperdine. What began as a national search to identify a chief diversity officer expanded into the creation of two roles.

In her new role, Dr. Smith reports directly to president Gash, serves as a member of the university’s steering team, and is a principal leader on the University Diversity Council for which she previously served as inaugural faculty co-chair in 2005.

Dr. Smith received her bachelor’s degree in computer science from Spelman College and her MBA and doctorate in organizational behavior from Case Western Reserve University. In May, she received her master of divinity degree from Interdenominational Theological Center in Atlanta.