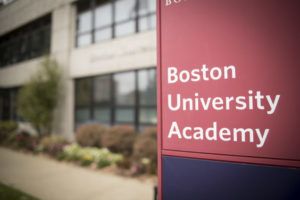 October 17, 2019 – Senior consultants Ben Bolté and Peter Phillip of recruiting firm Carney, Sandoe & Associates have placed Christos Kolovos as the new head of school for Boston University Academy. He will assume his role next summer.

“It became clear that Mr. Kolovos’ exceptional track record of organizational leadership, his expansive worldview and forward-looking curricular focus, and his talent for relationship-building with students, parents, teachers and staff are an ideal fit for our needs at Boston University Academy,” said Jean Morrison, BU provost.

Mr. Kolovos is associate head of school at Greens Farms Academy, an independent, pre-K-12 day school in Westport, CT, which has earned distinction for a rigorous, innovative, globally-minded curriculum. In his six years at Greens Farms Academy, he has overseen the school’s academic program, from faculty hiring and professional development to curriculum and accreditation; directed major institutional efforts to strengthen diversity, equity and inclusion; spearheaded the creation of a new schedule, service-learning program; and led the adoption of new courses focused on STEM. Mr. Kolovos previously served as director of global education at Belmont Hill School in Belmont, MA, where he chaired the history department and designed programs around global citizenship.

Mr. Kolovos said he will make several visits to the school before he takes over, “getting to know this extraordinary community better and putting us in a position for a fast start next summer.”

“The students are among the most capable, curious and hardworking high schoolers in the country,” he said. “What impressed me most about these young people, though, is that they are as kind, thoughtful and empathetic as they are capable.…The faculty members are deep-content experts, who share their passion for their subject with the students and care about each of their students as individuals, understanding that teaching and learning, particularly at this level, are deeply relational.”

Buffkin/ Baker Lands Diversity Head for Dalton School
Domonic Rollins comes to the private, college preparatory school from Harvard University, where he worked in the president’s office as a strategist and advisor on diversity, inclusion and belonging, and as senior diversity and inclusion officer at Harvard’s Graduate School of Education.

Boston University Academy’s identity is still evolving as it enters its 27th year. Its next head will be expected to shepherd the changes as they emerge as well as serve as the most visible spokesperson and advocate for the school, both in the greater community and within the university.

Since Carney, Sandoe & Associates’ inception in 1977, the firm has worked with over 1,800 independent, private, boarding and charter schools in 48 states and 32 countries to provide faculty recruitment, head of school search and strategic consulting services. Over the past four decades, the firm has facilitated more than 32,000 hires all over the world. Carney, Sandoe & Associates is based in Boston.

Mr. Bolté is one of the firm’s practice leaders for leadership search. He also serves as a placement associate for admissions and college counseling. During a tenure of more than 30 years with Carney, Sandoe, Mr. Bolté has amassed a deep network of education professionals. His work since 2002 has centered on retained head of school and key administrator searches, both domestic and international. His recent assignments have included search work at Packer Collegiate Institute (New York), Avon Old Farms School (Connecticut), Bay School of San Francisco, American School in Paris, Friends School of Boulder (Colorado), Polytechnic School (California), American School in London, New Canaan Country School (Connecticut) and Charlotte Country Day School (North Carolina).