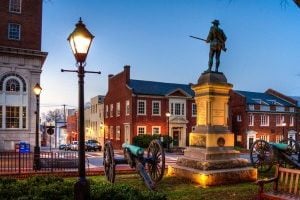 March 7, 2018 – BoardWalk Consulting, an Atlanta-based executive recruitment firm, has been selected to find the new CEO for the Charlottesville Area Community Foundation (CACF) in Virginia. Anne Scott, who led the foundation for four years, stepped down in October. Sam Pettway, BoardWalk’s founding director, is leading the search. Ayanna Grady-Hunt, a senior associate, is spearheading the research. The search is expected to be completed by early summer.

“CACF learned of us through associates at the Council on Foundations,” said Mr. Pettway. The search was competitive, he said. As part of the client’s discernment process, different board members spoke to community foundation references in at least four markets – Alabama, Florida, Michigan and New York.

“Virginia has been a key market for BoardWalk from the firm’s earliest days,” said Mr. Pettway. “In fact, our very first client was the Harvest Foundation, then a newly formed health legacy foundation, for which we recruited the inaugural CEO.” Since then, the firm has recruited seven CEOs for Virginia-based foundations, with assets ranging from $60 million to over $800 million.

The city of Charlottesville drew national attention last summer when violence erupted between white nationalists, who were protesting the removal of a statue of Robert E. Lee, and counter-protesters. That same day, a car plowed into a crowd of counter-protesters, killing a woman and injuring many others. President Donald J. Trump stirred controversy by blaming the violence on “both sides.”

“The violence of August 2017 was brought to Charlottesville’s doorstep by those living outside of the city,” said Mr. Pettway. “However, it also provided new visibility to the intersection of race, poverty and attendant disparities in the Charlottesville area that inform so much of the foundation’s work.”

In this case, ‘doorstep’ is literal, he added, as Heather Heyer was killed at the foundation’s front entrance in downtown Charlottesville when a car rammed into demonstrators protesting a white supremacist rally. That section of Fourth Street has since been renamed Heather Heyer Way.

The foundation played an integral role in helping the community move forward from the violence. It raised more than $1 million, much of which has gone to assist individual victims and help local groups expand their trauma counseling and support services.

CACF is looking for a CEO who understands and respects the special opportunities at hand and the context in which they must be pursued, said BoardWalk Consulting. Working with the board and staff, the CEO will be expected to provide the leadership and vision that invites, and reciprocates, effective, impactful collaboration with donors, program partners and community stakeholders in a manner consistent with the agreed-upon strategy.

The non-profit has enjoyed significant growth in assets and influence in recent years, and yet even its most loyal long-time supporters are vocal in highlighting opportunities for increased investment, increased collaboration and increased impact, said the search firm.

The group’s next CEO will be an experienced community leader broadly experienced in managing collaborative efforts addressing tough issues across diverse communities of interest, said BoardWalk Consulting. The search committee is open to a variety of career paths, but progression and impact in diverse environments – corporate, philanthropic, civic and non-profit – will be of special interest.

“We are seeking candidates who excel at convening and engaging varying community constituencies around common goals through impactful philanthropy,” said Mr. Pettway. “The search is purposefully broad in scope geographically, embracing local leaders as well as community-focused foundation executives in markets whose dynamics have commonalities with those in the Charlottesville area.”

“We are certainly open to candidates outside the foundation world, but these candidates would have to demonstrate, both personally and professionally, a material understanding of a community foundation’s special place in a region’s over leadership and engagement,” he added.

Founded in 1967, CACF facilitates philanthropy that improves the quality of life in Charlottesville and seven surrounding counties in the Blue Ridge area of Central Virginia. It has assets of nearly $185 million in over 300 funds.

The foundation is governed by a 16-person volunteer board comprising civic, business, academic and philanthropic leaders from across the service area. The board’s work is supported by various committees, the membership of which includes non-board members.

BoardWalk Consulting is a national search firm specializing in the recruitment of CEOs and senior leaders for operating non-profits and foundations. Since its founding in 2002, the firm has conducted some 350 engagements for clients in at least 29 states.

Its list of nationally prominent clients include: Year Up, Anti-Defamation League, Jane Goodall Institute, Southern Poverty Law Center and the CDC Foundation. While most of the firm’s clients are operating non-profits, BoardWalk has recruited heads for nearly 30 public and private foundations across the country.