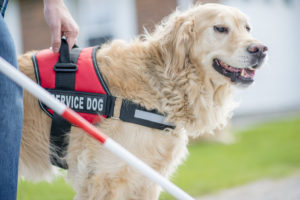 November 4, 2020 – Executive search firm Ballinger | Leafblad has placed Jeff Johnson as the new executive director of Can Do Canines, the largest provider of assistance dogs for people with disabilities in Minnesota. Marcia Ballinger, co-founder and principal, and Holly Kelsey-Henry, vice president, led the assignment for the search firm.

Mr. Johnson, who joins Can Do Canines from his role on the Hennepin County (MN) Board of Commissioners, begins his new job next month. He succeeds long-time leader and founder Alan Peters, who is retiring at the end of the year. “We are so fortunate to welcome someone of Jeff Johnson’s caliber and experience,” said Mitch Peterson, chair of the non-profit’s board of directors. “He will be 100 percent focused on advancing our mission of enhancing the quality of life for people with disabilities.”

Can Do Canine’s executive director is responsible for strategic development and programmatic leadership, fundraising, donor relations, financial oversight and overall management of the multi-program organization. Mr. Johnson will be charged with maintaining operational excellence in services, building and maintaining relationships with state and national non-profit, business and community leaders and partner organizations, along with other assistance dog organizations around the world. The organization wanted an inclusive, collaborative and enthusiastic leader, with a background in non-profit or community leadership and a passion for the mission of Can Do Canines and the individuals served.

Mr. Johnson filled that bill. He has served on the Hennepin County Board of Commissioners since 2009. He has also held numerous civic leadership positions at organizations including Northwest Twin Cities Young Life, Community Action Partnership of Hennepin County and Governor’s Workforce Development Council. Mr. Johnson was a member of the Minnesota House of Representatives from 2001 to 2006, serving as assistant majority leader and chair of the civil law committee. He was a two-time candidate for governor of Minnesota.  Mr. Johnson is also the founder of Midwest Employment Resources, a law practice focused on human resources topics. He holds a law degree from Georgetown University Law Center and is licensed to practice law in Minnesota and Illinois.

He replaces Mr. Peters, who during his tenure oversaw the organization’s placement of more than 700 assistance dogs with people with disabilities, all free of charge, as well as a $4.4 million capital campaign that led to the organization’s current, mortgage-free facility.

“The legacy that Al Peters and his team have created is really extraordinary, and I’m so thrilled to play a role in extending that legacy to serve even more people,” said Mr. Johnson.

“Jeff is perfectly matched to protect the legacy that Al Peters has established to carry our impactful mission into the future,” said Mr. Peterson.

Can Do Canines, founded in 1987, is based in New Hope, MN, outside of Minneapolis. Its fully trained dogs are provided to clients with mobility challenges, hearing loss or deafness, seizure disorders, diabetes complicated by hypoglycemia unawareness or children with autism. Can Do Canines pioneered the training of assistance dogs to detect low glucose levels for people with Type I diabetes and was among the first organizations in the country to train a seizure assist dog. In 2007, the non-profit became an accredited member of Assistance Dogs International, a non-profit organization whose purpose is to improve the areas of training, placement and utilization of assistance dogs.

Ballinger | Leafblad, located in St. Paul, MN, is an executive search and selection consulting firm co-founded in 2014 by Ms. Ballinger and Lars Leafblad. The firm works exclusively in the civic sector with organizations that do good—foundations, non-profits, higher education institutions and professional associations.

Ms. Ballinger has been well-known in the Twin Cities executive search community for nearly two decades. Over the years, she has developed a specialty in non-profit recruiting, most often working with boards of directors and search committees, assisting them as they make important and often challenging decisions. Ms. Ballinger got into executive search after a career in human resources development with technology companies, beginning with IBM.

Ms. Kelsey-Henry joined Ballinger | Leafblad in 2015. Previously, she worked as a journalist with Australian Provincial Newspapers and as managing editor of Living North Magazine, with the Duluth (MN) News Tribune. She has served as a campaign media advisor for a member of the Australian Parliament and as a media manager for the 2015 International Paralympic Committee World Championships, among other roles.

Check Out These Related Articles On Recruiting In the Non-Profit Sector: