Menu
View our Events
Stay Connected:
Bias poses a tremendous roadblock for employees to achieve their highest potential. A report from Morgan Samuels Company breaks down the meaning of the word, the types and impacts it has on performance management, and strategies to avoid it. 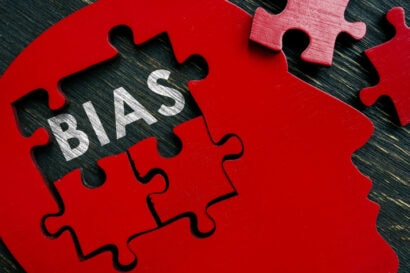 September 21, 2022 – Humans are inherently biased – it’s how our survival instincts enable us to make faster decisions. Thus, we make a majority of choices based on beliefs, biases, and gut instincts, rather than data, facts, and logic, according to a report from Morgan Samuels Company. While biases themselves aren’t good or bad, they can result in unfair decisions and have harmful outcomes. Deloitte suggests that in the workplace, “biases can lead to systemic discrimination, limit innovation, and create negative brand perception.” Morgan Samuels points out that these errors in judgment can lead to inconsistencies when it comes to hiring and firing, making job offers, providing coaching and development opportunities, giving raises and promotions, and conducting evaluations. In fact, nine out of 10 HR leaders don’t believe annual performance reviews result in accurate information.

“Biases create barriers in the workplace and can limit employees’ ability to achieve their fullest potential,” the Morgan Samuels report said. “But proactively and intentionally mitigating these biases in your performance management strategies will help to create an inclusive environment, address discrimination, and boost employee productivity and satisfaction.”

The Meaning of Bias

The Association for Talent Development defines “bias” as “a preference for or against a person, place, or thing over another, [which] can be held by an individual, group, or institution.” Bias is often associated with race or gender, but it can exist around almost anything. The keyword in this definition is preference. For example, the Morgan Samuels report explains that a team could have a bias toward hiring people from their alma matter. A company could be biased about hiring new talent who show passion and scrappiness. A group may have a bias for employees who are more risk averse.

“These preferences affect behavior, and that behavior has influence,” the Morgan Samuels report said. “Perhaps you view an employee who uses all their vacation days or signs off promptly at five as lacking work ethic. This perception could then impact how you view, judge, and treat them. And if you are in a leadership role, this perspective (and these assumptions) can impact performance management, undervalue the employee, and impair their career trajectory.”

Types and Impacts of Bias in Performance Management

Several types of biases may show up during the employee evaluation process. The Morgan Samuels report offered a few of the most common types to look out for:

Affinity Bias: This is the tendency to prefer people who look or think like yourself or who share similar interests and backgrounds. In this instance, your bias becomes a filter, and your ability to relate skews your judgment.

Halo and Horn Bias: The Morgan Samuels report explains that this refers to deeming something as positive (halo) or negative (horn) and applying that assignment to everything surrounding that person. One good or bad instance overshadows everything else. And managers rate employees as high or low performers based on a single thing they do or don’t do well.

Confirmation Bias: This is when you seek validation for your existing beliefs (in either the positive or negative direction) and reject information that is against them. If you think that somebody is a top performer or a bad apple, you will complete a performance evaluation that reflects those interpretations.

A newly released report by ExecSearches provides insight into how skilled executive recruiters avoid letting personal affinities affect their searches and instead hone in on core competencies. Developing a checklist of qualities, attributes and experience being sought in a candidate as well as strong training can go a long way in overcoming unconscious biases.

Contrast Bias: In this scenario, the Morgan Samuels report says, you compare people to their peers rather than against performance standards. Often referred to as stack or forced ranking, this approach doesn’t take into account a team of top performers. It also creates a high level of competition rather than collaboration among team members.

Recency Bias: Also known as the “what have you done for me lately” bias, this occurs when there are long gaps between performance reviews, such as annually. In this scenario, Morgan Samuels explains that your review focuses on a person’s most recent performance rather than over the full period. If they have been high-achieving all year, but their most recent project hasn’t gotten off the ground yet, they could receive negative reviews. On the other hand, if they have had mediocre performance over the past several months but recently saw some success, they could receive top marks.

Leniency, Strictness, and Central Tendency Bias: This occurs when leaders rate all of their reports similarly. Some managers consistently select high scores across the team (leniency bias), some consistently choose low scores (strictness bias), and some consistently rate everybody as average (central tendency bias). These approaches fail to provide employees with insights into their performance, what they are doing well, and areas they can improve.

Ultimately, these biases are constraints on innovation, productivity and performance, and employee engagement and job satisfaction. A Deloitte survey found that 84 percent of workers believed bias negatively affected their happiness, confidence, and well-being. Forty percent reported they would leave their current company for a more inclusive one where they felt valued and viewed with objectivity.

The goal of mitigating bias is to reach the other end of the spectrum: objectivity. “Objectivity” refers to treating people equally without favoritism, discrimination, or prejudice. The Morgan Samuels report offered a few strategies to avoid bias in performance management:

Assess your assumptions. Self-awareness is the first step in addressing bias. Do some self-examination and challenge your own mindset. The report says to consider the following questions. Are you making blanket characteristics about somebody? What preconceived thoughts have you had or assessments have you made about them? Are you comparing this person to yourself or somebody you know?

Be SMART. SMART goals are ones that are Specific, Measurable, Attainable, Relevant, and Time-Based, according to the Morgan Samuels report. This structure helps employees define goals and objectives, identify KPIs to measure progress toward the goal, and set clear expectations. Armed with data, you will be able to make more evidence-based assessments when it comes time to review.

Structure your feedback. The report notes that it’s good to ask employees open-ended questions to understand their motivations and challenges (versus projecting your own reality). But open-ended, unstructured review questionnaires can be subjective and highly ambiguous with their vague examples and suggestions. Use Mad Libs-style questions, which offer a fill-in-the-blank format and create more constructive feedback.

Leverage the data. Performance evaluations should not be conducted based on gut instinct. As Deloitte says, “Shift gears from sharing opinions to interpreting data to improve performance through objective, meaningful, and unbiased feedback.” Consider how you can extract real-time data and credible multi-source data to provide more specific, evidence-based observations and recommendations. For example, a 360-degree review approach, where an employee’s team members, peers in other departments, and direct reports are also asked to provide feedback, takes into account the entire scope of work and a variety of perspectives.

Use empathy and curiosity. “At the end of the day, we aren’t machines cranking out work 24/7,” the Morgan Samuels report said. “We are all human. Think about, for example, if an employee begins to show up late to work or leave early—is it because they are being belligerent or because they are simultaneously managing a challenge in their personal life? Ask questions to understand the situation and work together to explore how you and the company can help or be supportive.”