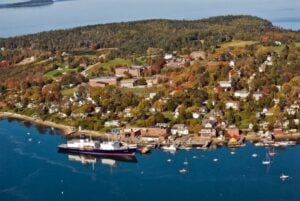 Mr. Paul will succeed William J. Brennan, who steps down at the end of April following 12 years in the role. His appointment follows a national search that identified 39 candidates for the position. “This has been a very exciting process for the academy,” said chairman of the board Earle Cianchette. “We are incredibly proud to now welcome Jerry back to Castine and to build the future of MMA with him.” A 1989 graduate of MMA, Mr. Paul has practiced law as a member of the federal and Florida Bar for more than 20 years. His work has included advocacy as a government affairs consultant and strategist, representing clients in governmental venues on matters of policy, appropriations, and grant funding. He also served as a court-certified mediator.

Mr. Paul served as the President-appointed principal deputy administrator of the U.S. National Nuclear Security Administration (NNSA) with a budget exceeding $10 billion along with oversight and management of three divisions: U.S. Nuclear Defense Programs, U.S. Nuclear Nonproliferation and U.S. Naval Reactors. As a former senior official within the U.S. Department of Energy, Mr. Paul has been engaged throughout domestic and international energy markets. Among other roles, he has served as distinguished fellow for energy policy at the Howard Baker Center for Public Policy, University of Tennessee in conjunction with Oak Ridge National Laboratory. Mr. Paul formerly served as an elected member of the Florida House of Representatives.

A marine engineering technology major at MMA, Mr. Paul graduated in the top five percent of his class with two minors: powerplant management and controls and nuclear engineering. After MMA, he earned a postbaccalaureate degree in nuclear engineering and a law degree. Mr. Paul held an unlimited tonnage USCG 3rd engineer license and a Maine third class engineer license. He sailed on Merchant Marine vessels intermittently and served as an engineering officer in the U.S. Naval Reserve MMR. He later served as a reactor engineer on shoreside nuclear reactors.

“Coming back to MMA is a real thrill,” said Mr. Paul. “The institution is poised for growth, and I look forward to working with our faculty, staff and students as we evolve into the 21st century,” said Mr. Paul. “As an alumnus, it is particularly exciting to be both a part of both the institution’s past and future.”

The Maine Maritime Academy is a co-educational career-oriented college of engineering, management, science and transportation with 950 undergraduate and graduate students and 300 faculty and staff. The academy was established by the 90th Maine legislature in 1941, and is one of six non-federal maritime training colleges in the U.S. MMA ranks among the top 10 in the nation for student return on investment and is a highly rated leader in education for maritime and other marine-related fields.

AGB Search conducts searches for college and university presidents, chancellors, provosts, vice presidents, deans, university system heads, and CEOs of coordinating boards and related foundations. The firm was founded by the Association of Governing Boards of Universities and Colleges (AGB) in 2010.

Dr. Targett joined AGB Search in 2018, bringing with her executive search experience at the dean, provost, and presidential levels. Her work is informed by more than 34 years of executive service in higher education. Dr. Targett is an ocean scientist who brings a multidisciplinary perspective to her work and has been a change agent focused on positioning institutions for success in a dynamic academic landscape. She has served as dean of the College of Earth, Ocean and Environment; director of the Delaware Sea Grant College Program; and president of the University of Delaware. Most recently, she served as provost and vice president for academic affairs at the University of New Hampshire.

Dr. Stewart recently joined AGB Search as a principal, bringing more than two decades of leadership experience in higher education with particular expertise in academic affairs, program development, the fine arts, and technology and communications.  Prior to joining AGB Search, Dr. Stewart spent several years at another prominent executive search firm assisting with senior-level searches in higher education. During her career in higher education, Dr. Stewart has served as provost and vice president of academic affairs at Mercy College in Dobbs Ferry, NY; dean of the School of Art and Design at Pratt Institute in Brooklyn, NY; and as dean of the School of Communications and Theater at Temple University in Philadelphia.