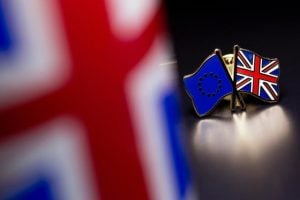 May 15, 2017 – A year ago, anyone uttering the word Brexit in the U.K. was looked at with quite a bit of trepidation. At the time, a host of executive recruiters were predicting that any move resulting in a break from the E.U. would be the death knell for their business and the talent industry, especially for those with business tied to London.

It’s not happened. A year on, Brexit’s imposing hand has come down far more gently and, as many now see it in this great international city, little has changed. For recruiters here, business continues to simply chug along. M&A activity among search firms, though, has picked up, and cross-border and trans-Atlantic recruiting combinations have also taken shape. And more London-based search outfits have established beachheads in America. Others, like ZRG Partners – an expanding American recruiting outfit – are establishing a new base in London. Everyone, it seems, is hedging for the future in their own unique way.

Upon closer inspection, the London search market – second only in size and dominance to New York – is thriving. What’s driving it – well, that depends upon who you ask. For its inaugural London search rm ranking this year, Hunt Scanlon Media tracked down nine leading headhunting luminaries for their thoughts on Brexit and the future. Here’s what they had to say:

Nick Hedley, Partner – Hedley May:
“The key thing about Brexit – or at least the result of the referendum because that is what we have been dealing with – is that the economy did not stop growing. This meant that for the search industry it was business as usual with a gently growing economy, slightly buoyed by growth picking up in the U.S. and Europe.” As for new strategies for the firm, Mr. Hedley points to its recent merger with New York-based Exchange Place Partners. “The strategic underpinnings for this deal were very clear and so, in fact, the decision to merge had already been made prior to the referendum result. However, if trade flows begin to increase between the U.S. and the U.K. at the expense of Europe then this merger will look to have been a particularly smart move.” Mr. Hedley said his firm is tracking slightly ahead of where it was 12 months ago and he expects it to continue on that trajectory.

Kester Scrope, CEO – Odgers Berndtson:
“Uncertainty is never good for encouraging investment or recruitment and we saw that reflected in a sharp decline in the U.K. for the quarter preceding the Brexit vote. However every quarter since has seen growth in our U.K. business. There is new political leadership (which few expect to change following the current, mercifully brief, election campaign), sterling has stabilised at a new norm and the FTSE has recovered to levels above those prior to the vote. There is a sense of back to business. Of course there will be protracted negotiations over the coming years and I expect this to be reflected in lower growth rates for the U.K. economy over that period, but there is already a sense that the period of mourning is over and life goes on.” The focus, now, he said, is in seeking out new opportunities. Mr. Scrope said that in addition to London, his firm is seeing particularly strong growth from its U.S. and Asia-Pacific regions.

Nick Shilton, Chief Executive – SSQ:
“There was a hiatus in 2016 in the run up to and immediate aftermath of the Brexit referendum. Since then, however, activity in the legal search sector has been very robust, which in no small part is a reflection of the highly resilient legal sector itself.” Mr. Shilton said that SSQ was five percent up for net fee income in 2016 compared with 2015 despite the Brexit referendum. “Demand for senior legal talent is at an all-time high while the legal interims market is gaining traction in London,” he said.

Chris Stainton, Chief Executive – The Miles Partnership:
“The search industry has not been affected by Brexit as many had predicted. We believe that the search sector in London remains buoyant due to the inherent strength of the U.K. economy and also the amount of international and cross-border search work being conducted from here.” Mr. Stainton said that his firm is continuing to develop its business from the U.K. and, while it is seeking to develop its international search capabilities further, it does not intend or plan in the short-term to open additional international offices. “Brexit has not changed our thinking on that matter,” he said. Mr. Stainton said the firm posted double-digit growth in 2016.

Simon Hearn, Chief Executive – Per Ardua Associates:
“CEO and chairman confidence is there and likely to be consistent until later in the Brexit negotiations; a year or two from now is when this could all change. Most are ‘just getting on with it’ and completing the important hires they need to get done.” Interestingly – most of the increase in hiring that Per Ardua has seen is replacement, and not growth, recruitment. As a retail financial services and insurance specialist, Mr. Hearn sees CEO confidence in the banking sector. Insurance is extremely busy and surprisingly asset management and real estate have perked up after a sluggish start, he pointed out. “Asset management in the U.K. is under attack from regulators and other market pressures – so this is surprising,” noted Mr. Hearn, who said Per Ardua has kicked off 2017 with the best first quarter in its 10-year history.

Mark Bishop, CEO & Managing Director – Perrett Laver:
“Despite the political and economic uncertainty that Brexit has brought, the reality is world leading universities, foundations, charities and schools still need to seek outstanding leaders. Indeed, it could be argued that with such global uncertainty, the quality of leadership of organizations that seek to have a positive impact on society has never been more important.” Mr. Bishop said that Perrett Laver, which specializes in higher education, non-pro t and related sectors, has continued to grow since Brexit and anticipates this continuing in the coming year.

Bianca Coulter, CEO – Coulter Partners:
“As a global firm, the U.K. for us is only part of the picture. In terms of our U.K. business, as we are specialized in life science and this remains such a priority for the U.K. Government and economy we have seen a lot of energy and effort in the sector here uphold our growth. We are definitely seeing some companies decide against the U.K. as an investment base and an increase in reluctance to move here among some of the talent that we have wanted to relocate from other markets,” said Ms. Coulter. “But, we are up on last year and pleased with our growth.”

Stephen Rodney, CEO – Fox Rodney Search:
“The one thing that did happen was that the U.K. pound plunged both against the U.S. dollar and the E.U. euro. That had the effect of increasing dramatically the foreign earnings of U.K. companies and indeed with law firms and other professional services organizations. The level of the FTSE 100 and 250 has increased on the back of those increased foreign earnings, meaning those companies which have bene ted are able to use their increased share prices to do deals.” All in all, said Mr. Rodney, most search firms have therefore been unaffected by Brexit to date.”

Charles Ferguson, Founder – Pure Search:
“The period leading up to Brexit was perhaps more uncertain than the period directly after the outcome. In the lead up to the referendum, we found many clients deferring decisions that had already been deferred; once the result of the Brexit vote had settled in, there appeared to be a release of that deferred demand. Our functional specializations of risk, compliance, and legal were in particular demand as these skill sets are perceived to be critical in helping the nancial services sector in navigating the complexities of Brexit. The London search sector has remained buoyant largely due to the size and complexity of the London market. London is continually going through change, and change is generally good for the search industry.” Continued and on-going disruption by technology, economic and political change in the U.K. and E.U., he said, and a constantly evolving and developing talent pool will always mean that search in London will prosper. “I remain optimistic about London, despite good place to do business.” Mr. Ferguson said Pure Search is up Brexit, and believe it will maintain its eminence in the world as a 25 percent since Brexit. 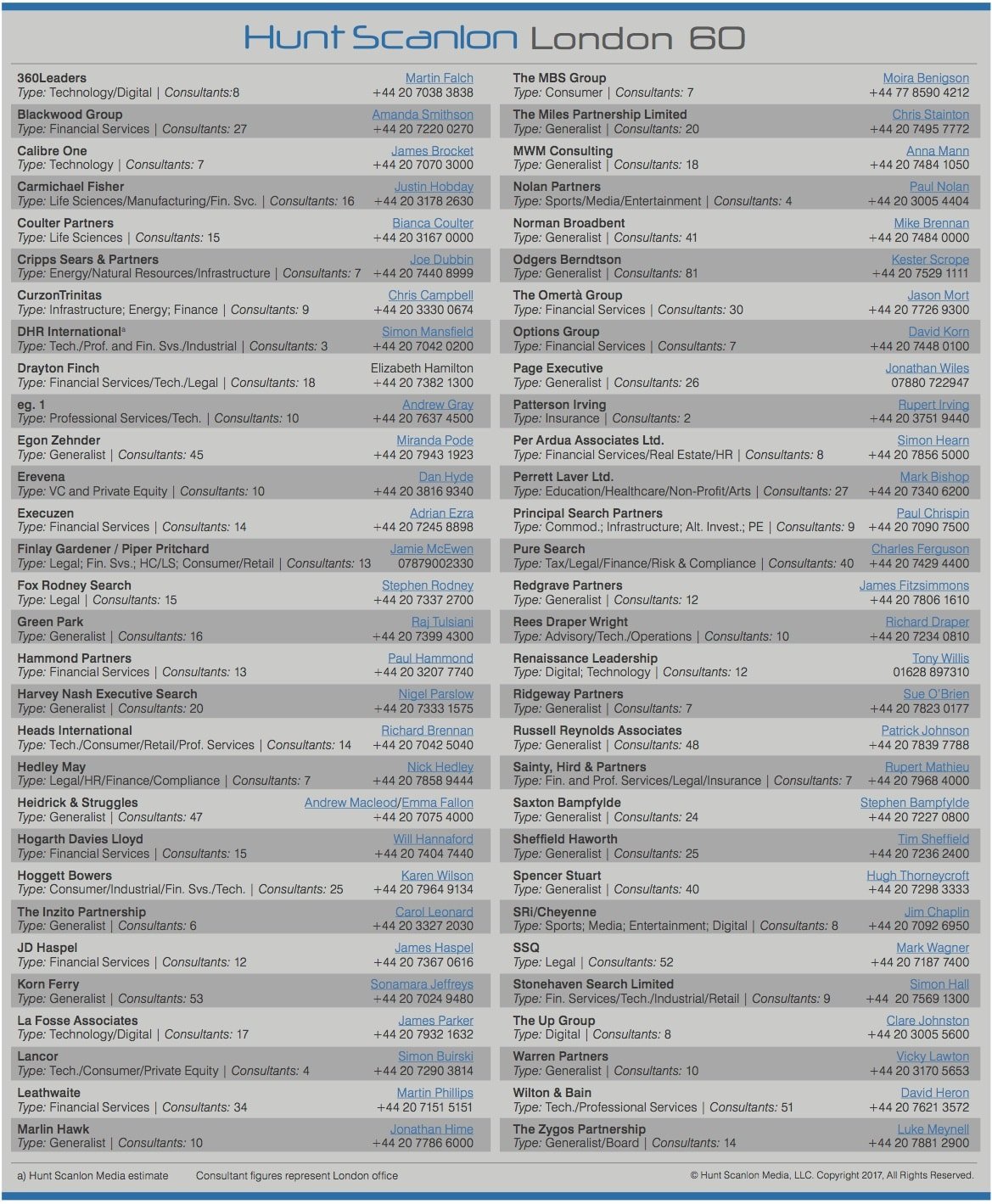