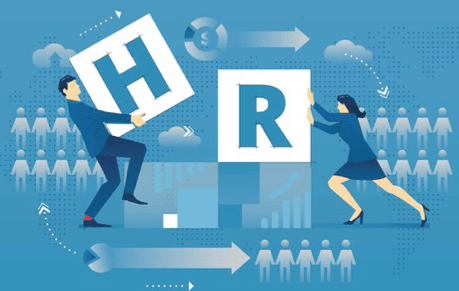 January 30, 2019 – Anyone with the ties to the human resources function knows how much it has evolved in recent years – and with it the role of the chief human resources officer. The biggest shift seen is in how the CHRO has progressed from fighting for a seat at the table to playing a key role on the executive team.

According to executive recruiters who ply their trade placing some of the best ones in the field (see accompanying story page 5), a great CHRO can be one of the most vital strategic human assets a company can have – closely partnering with the CEO and CFO. This leadership triumvirate is today equally responsible for executing business strategy, with distinct yet highly interdependent roles to play: the CEO defines or leads the vision and strategy; the CHRO articulates and drives the people agenda; the CFO manages financial resources and investments.

But it takes the three of them, working in unison, to keep all the organizational gears well-oiled. It takes people and financial resources to implement a business strategy, and this alone explains why the relationship between these three leadership roles is so vital. All of this is laid out in a new report released by executive leadership provider Spencer Stuart.

Based on the latest research by the recruiting firm, the role of the CHRO is becoming increasingly complex and is continuously changing due to a wide range of factors, including the advent of technology, artificial intelligence, automation, the changing profile of the workforce, new ways of working, and the increased focus on talent.

Julia Modise, a consultant in Spencer Stuart’s industrial and human resources practices, said the “profile of a CHRO has shifted from a traditional HR professional narrowly focused on his/ her function to a well-rounded business leader who can contribute meaningfully in all areas of the business.” Today’s CHRO, she added, is “a culture carrier and change agent who is commercially astute, analytical and technologically savvy, who speaks truth to power and influences softly yet assertively.” It is no surprise to find a CHRO with a combination of human resources functional experience and commercial operational experience, the Spencer Stuart report stated.

“Human resources in 2019 is much more personalized and professionalized than ever,” said Shelli Herman, president and founder of executive search firm Shelli Herman and Associates, a specialist in the HR field. “The modern workplace is more focused on culture and absolutely focused on the individual. Associates must feel valued in ways that have never existed before. Flexible schedules, extraordinary benefits, and opportunities to build and use new skills are now the new normal for best in class cultures,” she said. “Human resources executives are now culpable for being the architect and implementer of some of these high touch offerings.”

“The modern-day human resources officer is ubiquitous,” Ms. Herman said. “He/she will be expected to serve in a myriad of roles which focus on the most strategic company interventions to a more boots on the ground servant leader to everything in between.” Executive searches focused on identifying superlative CHRO talent are challenging, she said. “The list of ‘have to haves’ has become prodigious when it comes to the ideal candidate.

Ms. Herman said that in a world that has become all about social media, smart phones, and technology, the CHRO is now called upon to build leaders who can actually shake hands and network outside of the use of computers. “But, that is easier said than done,” she noted. “Core to this is the development of a culture that is balanced on innovation, while never forgetting the power of a relationship.” 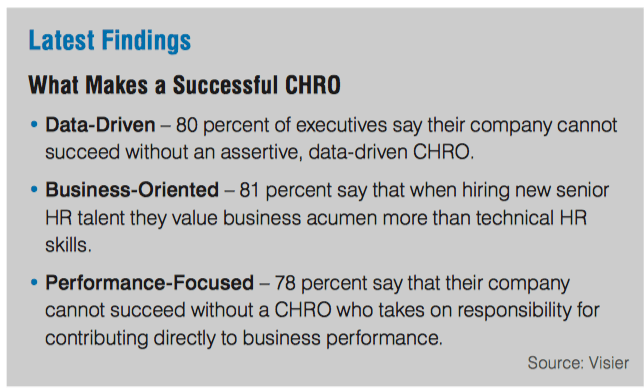 The Spencer Stuart report noted that the CHRO role is continuously changing, demanding different capabilities, including:

“The CHRO is expected to be discerning, future-orientated, open-minded, commercially judicious and able to make evidence-based decisions,” Ms. Modise said. “She/he is expected to develop robust people plans aligned to the business strategy. A people plan cannot merely serve internal HR functional requirements, it must demonstrate impact to the business.”

The CHRO plays a leading role in defining and adapting corporate strategies, structures, procedures and technologies to handle changes in external conditions and the business environment. “The people side of change management is often the most important element above the technical tasks necessary to enact change,” said Ms. Modise. “When the people side of change is poorly managed, change often fails or doesn’t achieve desirable results,” she added. “Driving change management and transformation requires an organization to embrace learning agility and innovation as a culture.” The CHRO is often expected to em body this agility and be the catalyst for change and transformation.

Issues of pay equality continue to gain prominence in the market and CHROs must play a key role in designing competitive, equitable compensation and incentive structures to attract and retain key talent. Ms. Modise said that “the role of the CHRO is to continuously test internal pay structures against the market and changing legislation; where potential gaps and risks are identified, the CHRO must develop risk mitigation plans.”

4. Clear understanding of board governance

“The CHRO role can add value to the board by bringing expertise in compensation, succession, talent, and the people implications of mergers and acquisitions,” Ms. Modise said.

Today’s CHRO has to have a good sense of the external industry competitive landscape. “She/he can keep abreast by playing an active role in relevant industry bodies,” Ms. Modise said. “Talent is becoming increasingly mobile, which makes it all the more important for the CHRO to have a global mindset.”

The CHRO has a key role in defining and co-creating the organizational culture with the executive leadership team. “A company’s organizational culture can make or break the most insightful strategy,” Ms. Modise said. “The executive leadership team and the CHRO have a shared responsibility in creating and driving a culture that is aligned with the business strategy.”

7. Committed to diversity and inclusion

The Spencer Stuart report noted that in order for diversity and inclusion to be successful, it has to be a top-to-bottom business imperative that is embedded in all aspects of the organization. “Diversity and inclusion cannot be an HR-led initiative but rather it should be CEO-led in partnership with the CHRO,” the report stated. “The CHRO plays an important role in articulating the business case for diversity alongside the CEO.”

The CHRO must possess referent power underpinned by competence and an undisputed delivery track record. “Referent power is acquired through strong interpersonal relationship skills, the ability to influence others, and being respected and admired,” said Ms. Modise. “This type of power is particularly important in a CHRO, since it is built on collaboration and influence rather than command and control.”

The CHRO role serves multiple high-level stakeholders such as the CEO, the board, shareholders and employees who often have competing demands. “She/he must effortlessly navigate and balance the various demands through effective communication, seeking alignment and managing expectations,” the report said.

“The CHRO must be seen everywhere within the organization,” Ms. Modise said. “She/he must be in touch with the pulse of the organization at all times to make unpleasant surprises less likely to happen.”

“In order to keep up with the changing demands of the world of work, CHROs and aspiring CHROs need to be intellectually curious and have a desire to learn,” said Ms. Modise. “They must keep abreast of developments, embrace technology, adopt a data-driven approach, obtain business experience, develop a strong network, keep growing, have a business mentor, a coach, and seize opportunities to participate in a wide range of business projects.” In short, today’s CHROs are required to do a job that would have been unrecognizable a decade ago. There is every reason to believe the role will continue to evolve rapidly over the next few years.