Menu
View our Events
Stay Connected:
When economic uncertainty hits, it is vital that boards update their succession plans to ensure that their companies are nimble, efficient and successful, says a new report from Spencer Stuart and Bain & Company. Preparation and planning are essential for preserving company health and performance. 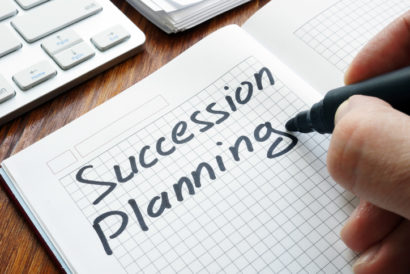 July 21, 2020 – Many boards put leadership succession on hold during turbulent times, even if the subject was high on the agenda before the crisis hit. That’s a common reflex. Facing ambiguity, people often select known options over unfamiliar ones. New research from Spencer Stuart and Bain & Company suggests that directors confronted with uncertainty act the same way.

The new report, Covid-19: Is Your Board Hitting the Brakes on CEO Succession?, focused on CEO transitions during a global economic crisis. This new research examined boardroom behavior and attitudes toward CEO succession, as well as implications for CEOs during times of economic uncertainty. The report found that CEO transitions fall to their lowest levels the year after a recession hits its bottom, while the most active director decisions around succession— ousting CEOs for poor performance or scandal — decline even further during the same period.

“Although boards are reluctant to change leadership during times of crisis, postponing succession creates risks,” the Spencer Stuart/Bain & Company report said. “It can deprive companies of both the leadership needed to navigate a turbulent landscape and the ability to identify and pursue opportunities to win coming out of the crisis.”

“Now more than ever, it is critical that boards regularly update their succession plans if they hope to be nimble, efficient and successful in the wake of this crisis,” said Cathy Anterasian, partner and co-leader of CEO succession services for Spencer Stuart in North America. “Per our analysis, we strongly encourage leaders to scenario plan in this moment to ensure that succession plans are up to date. Preparation and planning were key factors in preserving company health and performance during previous recessions.”

The report also examined the patterns of leadership transition over the past three decades, using historical outcomes to offer guidance to boards navigating the impact of COVID-19. It finds evidence that boards are behaving now as they have in previous recessions by concentrating on near-term decisions and management stability. For example, in April and May of this year, CEO transitions fell worldwide compared with the same months in 2019, including by one-third in Europe and Asia. Transitions have started to pick up again in June, particularly in Europe.

Additionally, the report revealed the important questions CEOs must ask and answer to chart a near-term and long-term course for the company and the need to align with their boards, which may not be as deeply knowledgeable about the changing fundamentals of the business or broader industry.

“For CEOs, all crises present a defining moment and COVID-19 is an extraordinary one,” said Courtney della Cava, partner and member of Bain & Company’s leadership and talent practice. “The best CEOs discover opportunity in crisis – they look beyond the recession and retool their business for a different future.”

“For example, we already have seen many CEOs step back to not merely refresh their strategy, but more importantly to use the crisis to fundamentally transform their business,” she said. “They’re leveraging key elements of the crisis, such as smart use of data to understand evolving customer needs, embracing digital acceleration, managing new ways of working, such as agile and remote working from home, and capitalizing on competitors’ weaknesses.”

In the past, leadership transitions declined most in industry sectors hardest hit in the recession. During and after the global financial crisis in 2007-2008, for instance, CEO transitions at U.S. financial services companies dropped more dramatically than in prior crises; while U.S. technology, media and telecommunications companies experienced a disproportionately larger drop during the dotcom recession in the early 2000s than other crises. 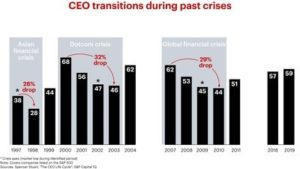 While the full effects of the recession caused by COVID-19 are yet to be seen and the pace of recovery is hard to predict, Spencer Stuart and Bain & Company also offered guidance to boards and CEOs on how best to manage the uncertainty.

According to the report, instead of focusing merely on leadership continuity, boards should put planning for the following three CEO succession scenarios at the top of their to-do list:

1. Plan for emergencies: Emergency succession planning – in which boards align on the criteria for, and narrow down, a list of potential interim candidates to prepare for the possibility that an executive becomes ill – will be essential for all leadership positions, not just the CEO.

2. Evaluate near-term needs: As the economy begins to stabilize, boards will have to assess how the CEO performed before and during the crisis and whether the CEO’s strengths are in line with the business strategy. Based on the CEO’s performance or their plans to retire, boards may decide that a near-term leadership change is needed. Boards will need to align views about the ideal CEO characteristics under different scenarios, such as steering the company through the immediate recovery or leading the business for the longer term.

Related: Virtual Recruitment: How to Hire From a Distance

3. Align for the future: The strongest boards update or refresh their long-term succession plans regularly, especially following a crisis, even if near-term changes are not anticipated. It commonly takes at least one year to achieve alignment around a succession plan, making those who get a head start be best positioned for the future. The report found when selecting post-crisis CEOs, boards will prioritize core leadership characteristics such as courage, empathy, humility, learning agility, judgment and the ability to elicit the best ideas from diverse teams — traits that enable CEOs to lead through long stretches of uncertainty and steer businesses through rapid change.

Getting Succession Planning Right During a Pandemic
The COVID-19 crisis has driven boards of trustees to review their succession planning processes. A new report from DHR International says that a viable succession planning process is essential to both business continuity and interruption preparation. Even if your company is currently in survival mode, there are still steps than can help you stay focused on the big picture.

According to the report, great CEOs strike a balance between collaborating with their boards to chart the right near- and long-term course for the company, while being under the board’s watchful eye. To successfully steer their companies through the crisis, CEOs should focus the following four areas:

1. Retool for a post-crisis world, reimagine the multi-year strategy: Beyond the swift, near-term actions to protect their employees, customers and businesses, top CEOs make their organizations fit for purpose in the world that emerges from the crisis. This includes developing and assessing strong hypotheses about the fundamental supply and demand changes in their industry to gain true strategic insight as to what it will take to win and the right strategy to accelerate out of the downturn. To enable this, CEOs transform strategy reviews from long-range, linear planning processes to a dynamic approach that takes into account the fast-moving and consistently evolving realities of the industry.

2. Refresh executive succession plans: CEOs should continue to develop executive talent and work with their chief human resources officers and boards to update emergency and longer-term succession plans for the leadership team. CEOs should use the crisis to both identify and fill gaps in leadership and elevate high potential executives into new roles that stretch their abilities.

3. Engage the board: Effective CEOs rethink how they can make the most of directors’ expertise and make sure that they are aligned with the board on the fundamental changes to their industry, the resulting implications and planned actions – and help the board adapt its operating cadence and agendas to a much faster-moving landscape.

4. Commit to personal reflection: The strongest CEOs recognize that they are in uncharted territory and challenge their own assumptions, solicit feedback and accept different points of view. They must also reflect on the demands of leading in a crisis and their own motivations, and how these factors influence the business decisions they are making.

The analysis is based on a data set of about 2,700 CEO transitions during recessionary periods from across the globe, covering the period from 1996 to June 2020. This was supplemented with broader secondary research acquired through news coverage and company websites. The data set covers companies listed on the S&P 500, FTSE 100, ASX 100 and other indexes across the UK, Germany, France, Spain, Switzerland, Netherlands, Hong Kong and South Korea.