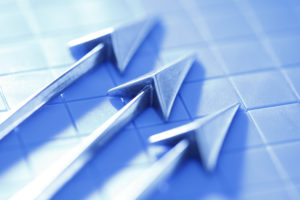 December 4, 2020 – Turnkey Search, a subsidiary of Turnkey Sports & Entertainment, has added Chad Chatlos and Katy Young Staudt to its recruitment team. The pair join the firm from Ventura Partners. “Chad and Katy are championship caliber sports recruiters,” said Len Perna, chairman and CEO of Turnkey. “We’ll be even better at helping our clients win, win, win.”

Mr. Chatlos will assume leadership of Turnkey’s college practice and also expand the firm’s coaching practice, which spans college coaches, pro coaches and other performance positions. Combined the new practice team has placed more than 75 top athletic directors and coaches. Ms. Young Staudt joins Turnkey as vice president. She is a recognized and respected college sports industry leader for coaching and administrative placements and is the search industry leader in women’s sports.

“We are excited to partner with Gene DeFilippo, Len Perna and the entire team at Turnkey,” said Mr. Chatlos. “Katy and I have been fortunate to build a respected practice at Ventura Partners to include working with many great brands in intercollegiate athletics over the years. Bringing these two companies and teams together positions us to be able to do even more for our clients throughout the professional and collegiate landscape.”

Mr. Chatlos started and ran the sports and entertainment practice at Ventura Partners for the last four years. During his tenure there, he completed head football coaching searches with marquee Power Five programs including Ole Miss, Kansas State, Rutgers, and Washington State. Additionally, Mr. Chatlos secured and completed athletic administration searches for the University of Utah, Purdue University, Penn State University, Texas A&M University, University of Nebraska and many others. With more than 15 years of experience in sports marketing and event management, he has extensive property, agency and corporate experience in the business of sports.

Prior to joining Ventura in 2016, Mr. Chatlos worked for Korn Ferry. He completed searches for the NFL, NBA, MLB, MLS, NCAA, multiple national governing bodies, brands and top  universities in athletics, such as Michigan, Miami and Florida. Mr. Chatlos earned a degree in economics from the United States Naval Academy and was commissioned as an officer in the United States Marine Corps. He served over six years with distinction including multiple meritorious decorations. While at the Naval Academy, he was the captain of the varsity football team.

Ms. Young Staudt is an expert in collegiate and professional executive search. Over the past 15 years, she has supported or led over 100 searches for Division I head coaches and athletic administrators for institutions such as Texas Tech, Ole Miss, Cal, Texas A&M, Oklahoma, Bucknell, Fairfield, Cleveland State, Dixie State, Yale, Johns Hopkins and many more. She has also worked with numerous clients across professional sports and events.

“We look forward to scaling up our practice at Turnkey, which is already an industry leader” said Ms. Young Staudt. “The emphasis that Len and his team place on client services and authentic relationships is very synergistic to our philosophy and approach. It’s a perfect match.”

Prior to joining Ventura in 2018, Ms. Young Staudt spent two years with WittKieffer, serving clients throughout the space of higher education. She was previously head of talent acquisition and recruiting for Learfield. Katy and has also held the roles of assistant athletics director, marketing for the University of California-Riverside, vice president of business development for a foundation management company specializing in 501c3 charity events for coaches, and vice president for Eastman & Beaudine, an executive search firm specializing in executive search in sports and entertainment. Ms. Young Staudt is on the board of directors for the College Football Assistance Fund, the University of Tulsa Alumni Association and serves as an advisory board member for Rising Coaches DEI Alliance. She was named Top “40 under 40” in men’s college basketball by The Athletic, a “Rising Star” in the sports industry by Partnership Activation Magazine and “30 under 30” in sports by Sports Launch Magazine.

USOPC Taps Turnkey Search for Multiple Searches
Turnkey Search has been enlisted to help the United States Olympic & Paralympic Committee (USOPC) in Colorado Springs, CO to lead its search for both a new vice president of communications and vice president of finance. “My mindset these days is to be thankful. Be grateful,” said Len Perna, Turnkey’s president, founder and CEO. “There are so many people hurting all over the world. And here at Turnkey Search we get to work with our Olympic team and support our nation’s great athletes. We couldn’t be more thankful for this honor.”

Mr. Perna manages all aspects of Turnkey Search. A top executive in the sports industry since 1985, he began his sports career as a business attorney for Cap Cities ABC/ESPN and also served as a top executive for the Detroit Red Wings/Tigers and the Dallas Stars/Texas Rangers.