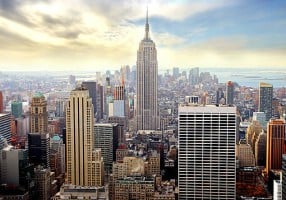 May 3, 2015 – No matter how much business activity is taking place in London, Hong Kong, or Dubai, New York City rules as the world center of commerce and deal making. From Wall Street and its stock exchanges to the bustling world of retail, fashion and high tech, millions of people and billions of dollars come in and out of the city every day. To be sure, the stalwarts of industry and commerce rule here still: AIG, Colgate-Palmolive, Verizon, Avon and Pfizer are just a few of the scores of Fortune 500 giants that call New York City home. But a closer look at the city today reveals a much more complex business substrate – crowding out banks and investment advisors are a myriad of tech companies, among them familiar names like Yahoo and Google, and unlikely ones called ZocDoc and Venmo and Kaltura. “New York is no longer just the financial capital of the world,” said Steven B. Potter, managing partner of Odgers Berndtson in New York. “It’s become a digital and tech hub that has seen the expansion of a host of digital innovators.”

So is it any wonder that of the 7,500 senior-level recruitment outfits that dot the globe 20 percent can be found in New York? Among the thousands of skyscrapers that line the city streets thousands of recruiters are busily filling some of the most prominent positions their clients can serve up. New York City is the epicenter of the senior talent management industry; every major global search firm has an office here – and for those not headquartered here, New York is their most important U.S. or North American outpost.

Hunt Scanlon Media set out this year to select the most prominent leadership solutions providers in the world’s largest search market. The firm settled on 60 of the most influential and innovative. Using a criteria based on reach, reputation, longevity and sector influence, Hunt Scanlon looked closely at hundreds of firms that initially qualified. In the end, just 60 made the cut. They include the smallest of recruiters, like J. Gregory Coleman & Associates, a financial services specialist, to the industry’s leading giants: Heidrick & Struggles, Korn Ferry, Russell Reynolds Associates, Spencer Stuart and Egon Zehnder. And many in between.

In Hunt Scanlon’s ranking of the Top 50 U.S./Americas search firms, nearly 40 percent maintain offices in New York City while global brands like Sheffield Haworth, Options Group, Proco Global, Caldwell Partners and EMA Partners maintain exceptionally strong and expanding practices in the city. While over one-third call themselves generalists, specialty practices rule the day at many of the listed firms and many of those are among the most recognized brands in their respective recruitment sectors: Herbert Mines Associates (retail); Bert Davis Executive Search (publishing/media); and Martens & Heads! (fashion & luxury). “In the past four months our New York team has placed 16 European-based candidates coming from six different countries of origin,” said Maxine Martens, CEO of Martens & Heads!, underscoring the importance of the firm’s New York locale. The booming tech and alternative energy sector has also been a magnet: Hobbs & Towne, the 21st largest U.S. firm and a specialist in this area, can be found here, along with True, the technology, private equity/ venture-backed and life sciences specialist. Legal recruiters like E.P. Dine, Major Lindsay & Africa and Howard-Sloan have firmly cemented themselves in Manhattan as well.

Clearly, the financial services sector maintains the largest position among the ranked firms and for good reason: the world’s largest and most prominent financial institutions are based in New York – and they employ hundreds of thousands; their human capital needs are, simply, insatiable. For firms like Korn Ferry, Heidrick & Struggles and Spencer Stuart, financial services drives their growth engine while at smaller specialist rivals like Whitney Partners, Braddock Matthews, Jamesbeck Global Partners, Prince Houston and Chanko Ward have carved out key niches in key specialty sectors within the overall financial services sector.

“We see financial services continuing to be a very important part of our business,” said Russell S. Reynolds Jr., chairman of RSR Partners whose New York office made the cut this year. “The boutique banking firms are using recruiters actively, as are asset management firms,” he added. Mr. Reynolds has maintained a unique vantage point on this sector for over 50 years. A former commercial lending officer with Morgan Guaranty Trust, Mr. Reynolds founded Russell Reynolds Associates in 1969 and it quickly became known as the leading firm in financial services recruiting. Although Mr. Reynolds broke rank with the firm he founded in 1993, Russell Reynolds Associates today is the only Top Five firm headquartered in New York and financial services is still its largest producing sector. At Top 10 search firm, CTPartners, financial services remains atop their sector list. In 2014, the firm posted global financial services fees of $51 million (30 percent of its total business), the lion’s share coming from its New York City business base. 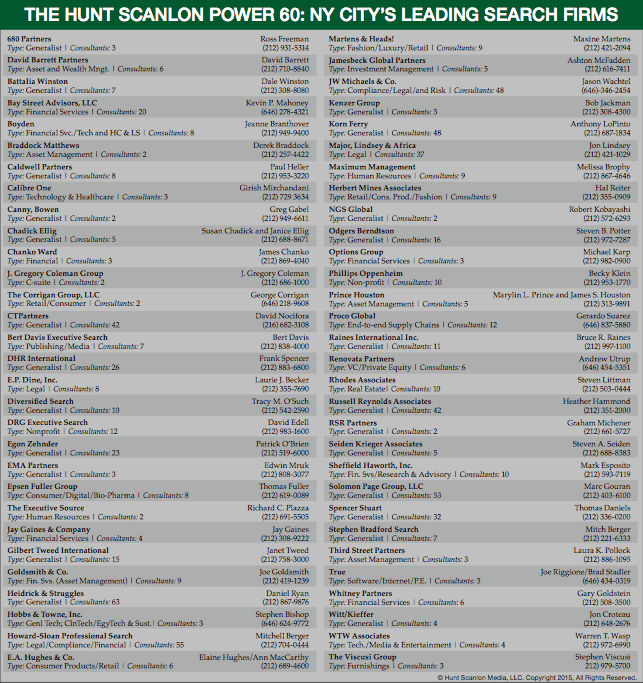