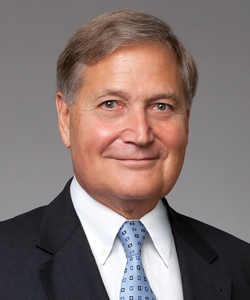 August 12, 2016 – Executive search firm Witt/Kieffer has appointed current CEO Charles ‘Chuck’ W.B. Wardell as its chairman. Anna Wharton Phillips, who joined the firm in 1988 and has served as chair for the past seven years, will remain with the firm as an advisor to the board.

“I’m honored to take the reins as chair during this time of strong and sustained growth for Witt / Kieffer,” said Mr. Wardell. “Our firm is meeting the needs of our clients and communities better and in more ways than we ever have. I look forward to helping Witt / Kieffer continue to grow and, from a governance capacity, keeping it focused on its strategic goals and mission of serving organizations committed to improving the quality of life.”

“I also want to thank Anna for her tremendous stewardship and many contributions to the board and to Witt / Kieffer during her tenure,” Mr. Wardell continued. “Her leadership has helped us get to where we are today as one of the best firms in the executive search industry.”

Mr. Wardell joined Witt / Kieffer in 2011. Since that time the firm has experienced record revenues and profitability, enjoying growth in its traditional lines of business, including healthcare, higher education, academic medicine, and information technology sector recruiting.

Prior to joining Witt / Kieffer, Mr. Wardell’s search career included 10 years at Korn Ferry serving as chairman of emerging markets and senior advisor to the chief executive officer. BusinessWeek named Mr. Wardell one of the world’s most influential search executives in 2008. He has received the Gardner W. Heidrick Award for contributions to the search industry, and has served as global chairman for the Association of Executive Search Consultants (AESC).

Notably, Mr. Wardell is a decorated combat veteran, having served with distinction in Vietnam. He began his civilian life in The White House — as deputy special assistant to Presidents Nixon and Ford and as deputy assistant secretary of state appointed by President Ford.

In the following interview, Mr. Wardell takes us inside his tenure at one of the nation’s leading search specialists. He looks back and ahead at the challenges and opportunities on the horizon for executive recruiters.

Chuck, what are you most proud of during your tenure at Witt / Kieffer? Discuss the firm’s growth since you took over as CEO five years ago.

There are a few things I’m most proud of. One is that people generally like working here—we’ve had some departures, which happens, but for the most part this is a company where top consultants and professionals want to get on board and stay for the long haul. This is reflected in the growth of our firm from 148 to 230 employees since 2011. Our consulting staff has grown from 70 to 95 during that time. I’m also proud of taking the firm in a new direction and succeeding in it. We started five new practices around our core practices the first year, all of which are thriving. We also launched an international joint venture with Ccentric Group, an Australian firm that works in the same spaces that we do – healthcare, higher education, and the life sciences. Witt /Kieffer Ccentric, based in London, is really taking off. Finally, revenue growth is important. We’re a bigger firm that is more capable of meeting our clients’ needs than ever.

How’s revenue growth look over the last half decade?

Our 2016 fiscal year (ending June 30) saw revenues of over $58 million, up from just over $35 million in fiscal 2011. This is a 66 percent increase over the five-year period (or a compound annual growth rate of about 10.7 percent per year over the same period). This does not include revenue from client administrative fee charges, which are in addition to these professional fee figures.

What challenges have you faced coming from a big firm culture to running a large boutique?

The main thing for me was taking on the role of CEO. This allowed me to introduce new ideas and act upon them. I was fortunate that I was coming into a firm that was already successful but was also open to growth and change. It’s been a good fit, which surprised many people because I did not have a healthcare background.

What potential challenges are on the horizon for the executive search industry?

Economies are always a concern—across industries, regions and countries. If business is not good and industries are lagging, search firms will struggle accordingly. We like to think that we’re in sectors – healthcare, education, life sciences – that are changing dramatically but primed for continued growth and will always be strong fields to operate in. And new technologies and other things are changing search work. One of the nice things is that our firm is insulated somewhat from some of those changes in that we are still a relationship business. For the level of recruiting that we do, it’s important to get on the phone, show up for face-to-face client meetings, and to manage jobs the old-fashioned way. We’re leveraging technology to be smarter, but we’re still defined by our people. Another thing is that while we had strong growth, we have done it with our existing workforces and existing customers. We didn’t buy anything and we did not bring in huge rainmakers, which can be very disruptive to a firm. We also didn’t incur any debt.

Are there any plans to take the firm’s brand overseas?

Witt / Kieffer will continue to go overseas when our clients ask us to—for example, to recruit in the Middle East, Asia and Europe, most notably in the U.K. As noted, we have launched Witt / Kieffer Ccentric in the last year to allow us to serve clients overseas. This is a joint venture and will clearly help further the Witt / Kieffer brand.

On a personal level, Chuck, is there anything from your Vietnam experience that has translated into the work you do today?

There are many things that military service instilled in me and many of the lessons I’ve learned continue to serve me today. One of the first lessons of combat leadership is “do something.” In business, that translates into “make timely decisions.” The second, most important thing that I’ve learned is that it’s absolutely critical to find ways to help difficult people work together. Unless you can organize, direct and create a cohesive organization, you will not meet your business goals. Lastly, the military teaches you to delegate, find good people and let them do their jobs. Strategy comes from the top and implementation comes from the firm!

Getting Your Business ‘Exit Ready’ for a Sale