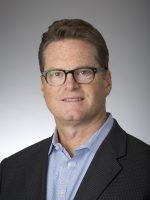 Prior to joining Strawn Arnold in May 2018, Jeff Frazier was The Medicines Company (MDCO) Executive Vice President and Chief Human Strategy Officer from June 2014. During his tenure, he was an officer and member of the Executive Management team that lead the business transformation from an 800 person organization with multiple “in market”, hospital sector products to a development stage company of 60 people focused exclusively on Inclisiran, an important cardio vascular product in late stage development. Three distinct divestitures were executed from 2016-2018, which generated $1 billion in non-dilutive capital plus the potential of an additional $1 billion in milestone payments. This capital infusion was required to complete phase III trials and bring Inclisiran to NDA filing. Inclisiran, is an investigational agent which is potentially a first-in-class lipid-lowering drug, to reduce LDL-cholesterol. The Medicines Company is a publicly traded biopharmaceutical company with market capitalization of around $2.8 billion. Prior to joining MDCO, Jeff was the Corporate Vice President of Human Resources and Public Affairs at Novo Nordisk Inc. from 2004 to 2014. His leadership resulted in Novo Nordisk being named the number one “Best Place to Work” in New Jersey for four out of six years (2004 – 2010), and in being named to the Fortune Magazine “100 Best Companies to Work For” for six consecutive years (2009-2014). Before taking his position at Novo Nordisk, Jeff was Head of Human Resources for Pharmacia Corporation’s Global Pharmaceutical Business unit, where he served as a member of the global commercial leadership team. There he supported international commercial operations of 12,500 employees in 50 countries, through the design and execution of human resources strategy and programs. Prior to that role, he held a number of different senior human resources positions in Europe and in the USA. Jeff received a bachelor’s degree in business administration from Kent State University.