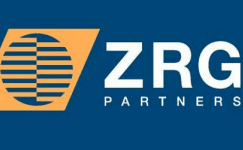 February 24, 2015 – When private investor Austin Marxe recently ponied up a $5 million lifeline to help CTPartners stave off its short term cash flow needs, he likely wasn’t looking for a long term place to park his money. In the span of less than a month, Mr. Marxe and his colleagues at AWM Investment Co. doubled their money, seeing a $3.44 per share investment rise to just under $7. How long they stick around is anyone’s guess. But other private equity investor groups, with three to five year time horizons in place, say they see the senior talent advisory business ripe for capital infusion and investment.

Just last month, West Orange, NJ-based ZRG Partners obtained capital funding with Northcreek Mezzanine to allow the search firm to pursue strategic acquisitions and attract key executive recruiters to fuel its growth. ZRG, named to the Hunt Scanlon Media Top 50 U.S./Americas recruiter rankings for the first time this year, recorded just $9 million in U.S. revenue in 2014, but that figure represented an impressive 45 percent spike in fees – making it one of the fastest growing search firms of its size. Globally, the firm grew by 29 percent, to $13 million.

“The time is right to accelerate our pace of growth,” said ZRG CEO Larry Hartmann. He said that he is now finding a market driven by candidates and that clients are seeing the true value of retaining outside, expert recruiting advice. “Landing top talent takes hard work, persuasion and influence,” said Mr. Hartmann, who noted that the return of long term incentives and equity schemes to attract key leaders is pointing back to the value of a solid search partner to manage the talent acquisition process effectively. “We believe the best solution for clients is a mid-size global search firm.”

What’s good for clients seems to be good for investors, too. Rodger Davis, a Northcreek managing partner, said that his focus is on growth companies with great management teams and platforms that can scale and grow with capital infusion. “We felt ZRG’s data and analytics approach to hiring is disruptive” and will continue to drive growth, he said.

Northcreek Mezzanine makes creatively structured equity, mezzanine and senior debt investments in lower middle market companies. It typically targets companies with revenues between $15 million and $150 million with typical investments ranging from $2 million to $10 million. Neither ZRG nor Northcreek would reveal how much was invested in this deal, but it included preferred stock, common stock and subordinated debt. ZRG Partners, a mid-sized global executive search and human capital management firm, has 23 consultants working from 11 offices worldwide. Last year, the firm acquired New Directions Search of Wheaton, Il, which helped expand the firm’s manufacturing and industrial practice. Mr. Hartmann sees more acquisitions on the horizon as well as the opening of new offices and the hiring of more recruiters and support personnel. All of it, said Mr. Hartmann, requires investment capital. That is music to the ears of Northcreek Mezzanine.

A look at the surge in growth among Hunt Scanlon Media’s Top 50 U.S. recruiters this year seems to support the notion that the senior talent industry’s sweet spot can be found in the middle of the pack. That isn’t to say the largest firms aren’t holding their own – and then some. Among the 10 largest U.S./Americas search firms, nine reported double digit growth rates in 2014. Among them, Caldwell Partners (up 33 percent) and Egon Zehnder (up an estimated 23 percent) showed the largest increases.

Chicago-based Osprey Capital LLC, a family office that owns No. 6 ranked DHR International, is so bullish on the talent sector that it has been quietly building a stake in a direct rival: publicly-traded CTPartners. It now owns more than five percent of that company’s stock making it one of its top five stakeholders. Osprey’s CEO, David H. Hoffmann, a founder of DHR, made an unsolicited bid to acquire 100 percent of the equity of CTPartners recently but was stiff-armed by its CEO Brian Sullivan, who’d prefer the Hoffmann family pack up their investment advisors and go away. Mr. Hoffmann and his son Geoffrey, who now runs DHR, are dug in. “We continue to strongly believe that the combined companies will have tremendous value for the clients and employees of both organizations,” said Mr. Hoffmann. With CTPartners set to report a 32 percent global annual revenue gain for 2014, Hunt Scanlon Media estimates the combination would result in a $350 million senior-level staffing giant with a network of more than 400 recruiters operating from 75 offices in 24 countries. Though CTPartners has been confronted with widely reported challenges recently, Mr. Hoffmann said he believes the core of CTPartners remains intact and attractive. “We are determined to pursue every means available to complete a business combination,” he said.

Notwithstanding investments that continue to be made in two other U.S. publicly-traded recruiting companies, Korn Ferry and Heidrick & Struggles, private equity dollars seem more poised to flow to the privately-held, mid-sized search players. “We see solid growth opportunities right now for mid-sized search firms that are big enough to service global clients and expand their solutions, but are not yet meaningfully held back by off-limits issues,” said global services analyst Tim McHugh of William Blair & Co. “I see solid interest in investing in the sector.”

Mr. McHugh cites brand, intellectual property, and other competitive advantages that can institutionalize a firm’s revenue streams as important investment enhancements. To be sure, private investment money, as in the case of ZRG Partners and its supporter Northcreek Mezzanine, is starting to flow in at different entry points as investors take note of search firms’ expanding service platforms (leadership assessment, board advisory services, executive coaching, and organizational culture shaping to name just a few) and their ability to scale and grow with capital infusion. Having a global angle is also an attraction, say investors, as they seek leverage in one small, but highly dominant, segment of the talent business that for today, at least, knows few bounds. 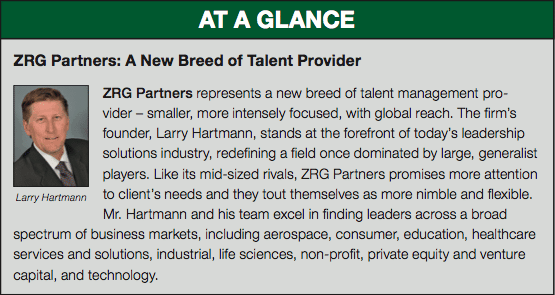