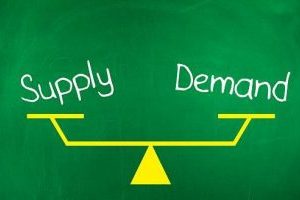 February 14, 2017 – The life sciences sector is rapidly expanding – and as it does, the need for senior level executives who can transition and transform businesses within it is accelerating. Specialist recruiters are stepping up by targeting versatile leaders with strong backgrounds in global marketing and finance. One thing is clear: The number of quality candidates isn’t catching up to the demand.

One of these go-to search consultants is John Hawkins. He is well versed in director and executive level recruiting, CEO succession planning, and investment banking, and he’s been bolstering one leading search firm’s life sciences and healthcare recruiting practice since joining the firm in 2015. Odgers Berndtson, which now ranks No. 22 among Hunt Scanlon Media’s Top 50 executive search firms in the Americas, is fast becoming a leadership solutions provider of choice to the sector.

Mr. Hawkins said that a paucity of experienced candidates who understand the pharmaceutical industry as well as equity and debt capital markets has increased the demand for more search firms serving the sector. But knowing where to look and who to tap for the plumb assignments – and being able to convince leaders to jump ship for what you believe is a far superior career opportunity, is what separates good recruiters from the really great ones, say his clients.

“It’s a topic of some concern to chief human resource officers (CHROs), who are not only recruiting talent but trying to retain talent,” said Mr. Hawkins, who places the number of executives with the track record and experience to be considered elite job candidates at just 10 to 20 percent. “They’re typically off the market almost as soon as they want to be. They have enormous power.”

These CEOs have the ability to provide strategic direction, as well as manage to a bottom line, interact with investors, negotiate with strategic partners and successfully drive long-term growth in the revenues and profitability of the business. These leaders, he said, are most in demand.

How to Lure Talent

Mr. Hawkins said a limited number of top candidates results in clients offering lucrative financial packages to lure talent. In the last year, he said, there’s been “an upward creep in compensation packages” for the most highly touted executives in life sciences. “In my recruiting practice,” he said, “it’s been noticeable.” There are now more entities competing for the same pool of talent, he said. “If a candidate you want is really good, you’ve got to move on him or her and be prepared to pull the trigger.” And that, he said, more often than not, takes money and incentive packages. 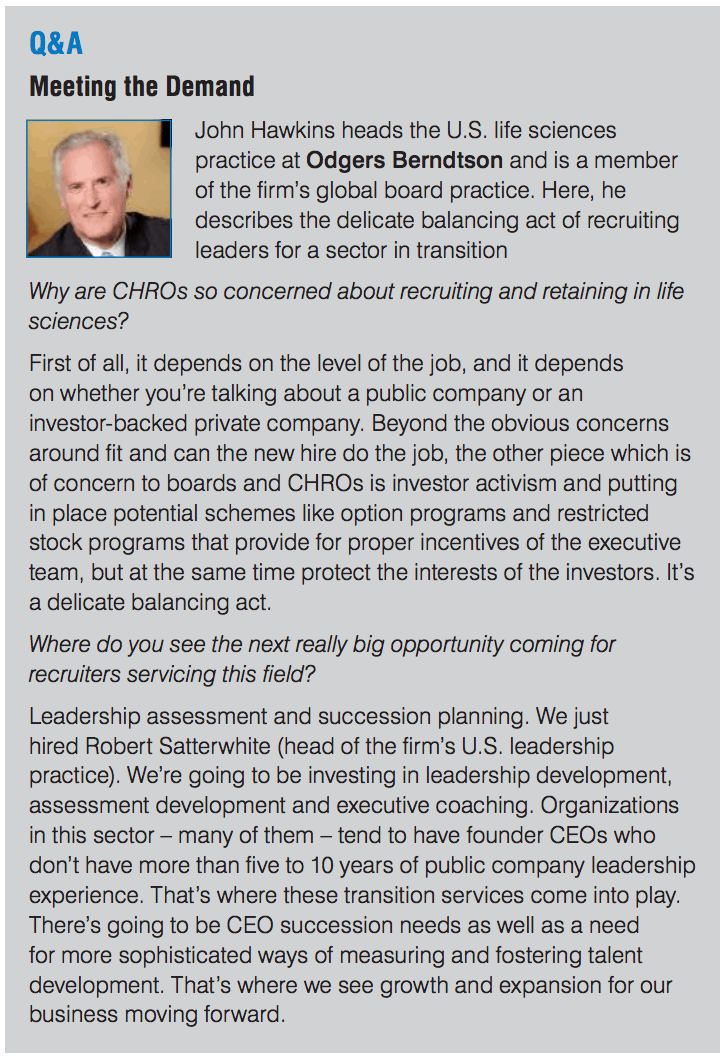 Now based in Odgers Columbia, MD office, Mr. Hawkins, who has spent 30-plus years in placing CEOs, C-level executives, non-executive directors and a range of operating roles in the U.S. and overseas, is among those leading the firm’s big push in the U.S. As the second largest search firm in Europe and the largest search firm in the U.K. and Canada, the firm has expanded to 50-plus employees in the U.S., including 19 partners. One recent example of its work: the firm placed the chairman, CEO, CFO and six new board members at Valeant Pharmaceuticals, a multinational specialty pharma giant.

It was a breakthrough for Odgers to secure Canadian-based Valeant as a client. But it can also be seen as a sign of the times for the search industry. Odgers knowledge of both the specialty pharmaceutical industry and professionals who are relevant in the financial community at large (including pharma CFOs and investment bankers) aided in the multiple searches it undertook for the company. “Securing a CEO assignment from Valeant as a mid-sized global recruiter reflects, more than anything else, the acceptance of our global search brand in the U.S.,” said Steven B. Potter, the firm’s U.S. managing partner.

Some of the search firm’s other recent work bears this out. In the last several years, its consultants have placed two of the leading FTSE 100 chief executives – for Lloyd’s of London and Legal & General Group plc – in addition to a number of board placements. “We are now seen as a safe global search brand for this sort of work,” said Mr. Potter. Indeed, a sign of the times.