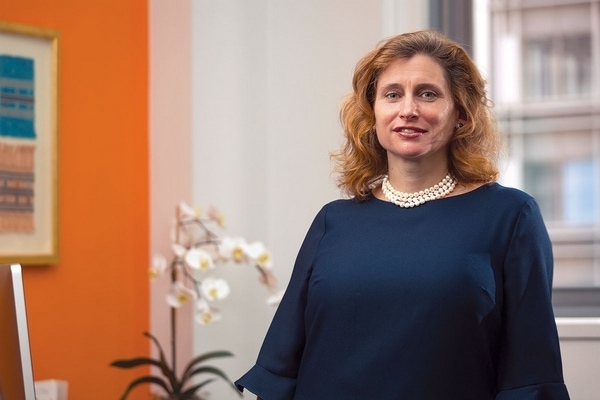 In April 2015, Celena Roldan, then executive director of Erie Neighborhood House, attended an Economic Club of Chicago dinner. She had spent 15 years at the agency, which serves about 5,000 people a year, and was pondering her next career move. At the dinner, Roldan met Alison Ranney, managing director and Chicago office head of nonprofit-executive search firm Koya Partners.

Two months later, Roldan found herself in Koya’s offices, on the sixth floor of the Civic Opera Building, about to discuss her future with Ranney. The prospect of voicing her aspirations made Roldan a little nervous; she had spent her career in a sector that can view ambition as immodest. “It was a really difficult conversation for me to have,” Roldan says. Ranney welcomed her and invited her into a small conference room, bright with orange walls and vintage Lyric Opera of Chicago posters. Roldan’s apprehension melted. “She has a great laugh, a fantastic smile,” Roldan says. “From the minute you meet her, she pulls you in. You can tell she’s starting to think about your hopes and dreams and aspirations.”

By October, an opportunity had materialized—CEO of the American Red Cross of Chicago & Northern Illinois, one of the biggest Red Cross regions in the country. Roldan now oversees an operation that helps 9.5 million people a year, a pinch-me situation for a nonprofit executive like her. “Working with Alison was an unbelievable experience,” Roldan says. “She opened the door to this dramatic change in my life and my ability to serve on such a significant scale.”

Ranney is not the only nonprofit recruiter in the city. Still, with her knowledge of the sector and her commitment to placing women and people of color in crucial roles, she is changing the landscape of Chicago nonprofits.

She and her team have recruited dozens of women and people of color in “first” roles at organizations around the city. Roldan is the first woman of color to head the American Red Cross of Chicago & Northern Illinois; Ana Dutra, CEO of the Executives’ Club of Chicago, is the first Latina in that role. Michelle Larson, whom Ranney recruited as CEO of Adler Planetarium, is the first woman to head one of Chicago’s 11 Museums in the Parks. With Ranney’s guidance, Lyric Opera of Chicago named a woman, Roberta “Bo” Lane, to be its first-ever CFO.

Her impact is national, too. Ranney has placed executives in other cities and says Detroit nonprofits and higher education institutions are a focus now. Commitment to diversity “is clearly a part of Alison’s DNA,” says Angelique Power, president of Field Foundation of Illinois and another Ranney/Koya placement. Power chairs the board of Grantmakers in the Arts, a Seattle-based national nonprofit, which chose Koya to help select its new CEO. “She and Koya are very thoughtfully remaking what leadership looks like across the country,” Power says.

Each year, Ranney and her seven-person staff work on hundreds of searches in Chicago and around the country. They win some after competing with other national firms. Other nonprofits complete one search with Ranney, then return as repeat customers. Organizations pay Koya a percentage, as high as 25 to 30 percent, of the placed executive’s first year of compensation. Top-level placements include James Rondeau, president and director of the Art Institute of Chicago; Julia Stasch, CEO of MacArthur Foundation; Jean Franczyk, CEO of Chicago Botanic Garden; and Janet Froetscher, president of the J.B. & M.K. Pritzker Family Foundation. 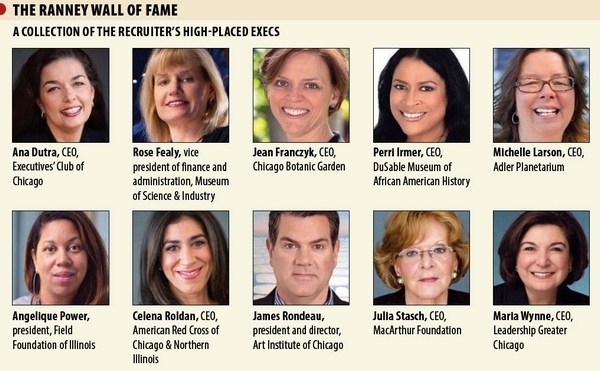 “She’s probably the best search professional I have worked with, and I’ve worked with a lot,” says David Mosena, CEO of the Museum of Science & Industry. Ranney “really understands the clients and the clients’ needs, not just on paper,” he says.

Ranney’s current high-profile searches include a CEO for the Chicagoland Chamber of Commerce; a director for MacArthur Foundation’s 100&Change initiative; and a chief development officer for Lyric Opera of Chicago.

ALL IN THE FAMILY

“One thing that brings me great joy is when people know I come from a family that has a history of being civically involved,” Alison Ranney says in an interview at Koya’s offices, tastefully filled with mementos of the city and Koya clients, and featuring a conference table made for her by Chicago-based artist Theaster Gates. “They say, ‘What you are doing now makes so much sense.’ “

Ranney, her older sister and her younger brother grew up in Hyde Park, a diverse, urban experience she calls “a gift” from their parents. They emphasized the importance of civic connections to their children. George Ranney Jr., an Inland Steel exec who was on the board of the Metropolitan Planning Council, sometimes brought Alison to board meetings. Dinner guests included influential people like attorney Newton Minow, who succeeded her great-great-grandfather Ryerson as WTTW board chair.

Ranney attended the University of Chicago Lab School through ninth grade, then finished high school at Phillips Academy Andover in Massachusetts. Before enrolling at Brown University, she took a year off and had four internships, including studying hairy-nosed wombats in Australia with a biologist from Brookfield Zoo and working in Illinois state government with Paula Wolff, now director of the Illinois Justice Project. At Brown she earned a bachelor’s degree in urban studies; her law degree and MBA are from the University of Chicago.

She was a mergers and acquisitions attorney in the Chicago office of Skadden Arps Slate Meagher & Flom, and spent a few years working for her parents’ Prairie Crossing venture and as an AT&T Wireless exec before a fellow former attorney recruited her to work at Russell Reynolds Associates, which has an office in Chicago, in 2004. She worried that the work would be boring. Not so. “It was so fulfilling, so interesting, so diverse in terms of content and people issues,” Ranney says. She left to launch Koya’s Chicago office in 2014.

Leadership Greater Chicago CEO Maria Wynne, whom Ranney placed three years ago, calls Ranney the “it girl” of nonprofit search in Chicago. “With her, it’s not a transaction,” Wynne says. “She wants you to be successful, she wants the organization to be successful.”

During Ranney’s 13 years as a nonprofit recruiter, the sector’s need for top-level talent has intensified as the line between for-profits and nonprofits has blurred. Ranney calls her clients “mission-driven” rather than “nonprofit,” to underscore that nonprofits are businesses that need effective leaders. “There’s more scrutiny on having the right management in place,” says Christopher Hunt, president and co-founder of Hunt Scanlon Media, publisher of Executive Search Review, an industry newsletter.

Two decades ago, the major search firms—including Russell Reynolds, Korn Ferry and Spencer Stuart—conducted most nonprofit searches. Today, 247 firms nationwide deal exclusively with nonprofit and higher education searches, which account for 10 to 15 percent of the $15 billion executive search industry, Hunt says. Koya, among the top 50 in revenue, enjoys a “stellar” reputation, he says.

Boston-based Koya has 50 employees in nine offices nationwide. Its revenue grew 33 percent, to $8 million, in 2016, and it’s on track to post $10 million in revenue this year, says founder and CEO Katie Bouton. Bouton met Ranney in 2011 through her father-in-law, Marshall Bouton, former president of the Chicago Council on Global Affairs. Ranney’s Chicago office now accounts for 20 to 25 percent of the firm’s business. “It’s blown away every expectation we ever had,” partly due to Ranney’s attention to detail, Bouton says. Ranney even hosts an annual dinner for placed candidates. “She likes to see the ripple effect of how (executives) are working together,” Bouton says.

Ranney and her husband, Clean Energy Trust CEO Erik Birkerts, have three children and live in Lake Bluff. She belongs to the Economic Club of Chicago and the Chicago Network, and serves on the boards of Public Radio International, World Business Chicago, Goodman Theatre and Forefront.

That cultural and civic involvement “helps her understand what an organization needs, and what good candidates we might not be aware of,” says Richard Rodes, chair of the search committee at Hubbard Street Dance, which has tapped Ranney to find a new executive director. “Alison knows where people are in their development cycle. She can see what works and what doesn’t,” he says, noting that Hubbard Street interviewed six national search firms before choosing Koya.

Ranney says she can’t imagine doing anything else. Her work, her nonprofit board service and her family keep her busy. When asked what she would do if recruiting were no longer an option, Ranney laughs. “That would be so sad,” she says. Chicago’s nonprofit community would most likely agree.