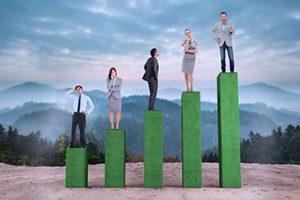 “We are proud and extremely happy that a number of senior executives have chosen to join HTP,” said Raffaele Jacovelli, managing director of the Brussels-based firm. “At the beginning of the year we set out to make a major change: become our client‘s go-to partner to undergo digital transformation in all corners of their business. What we now see is a resounding success: ten new clients, five new partners, and over 30 percent growth. It’s this kind of momentum that we plan to continue into 2018 and beyond.”

The move, said the firm, is a culmination of a year of strategic transformation, which began with the idea that to help companies embrace digitization and innovation through new talent, Hightech Partners must itself become an innovator in its industry.

HTP’s transformation, said the firm, involved leveraging the competencies that set it apart in the executive search market: the speed and accuracy with which the partners find suitable matches for its clients as well as the technology it embraces to make those matches.

Currently, digital transformation is at the strategic heart of many businesses. Digital capabilities are no longer limited to ICT functions, said HTP, and organizations must now engage digital solutions in many of their core competencies. Hightech Partners’ expertise lies at connecting digital savvy leaders from all corners of the business with opportunities in forward-looking companies.

A key component of HTP’s transformation has been building awareness of the cutting-edge technology, such as Big Data analytics and artificial intelligence, which it uses to improve speed of execution and set itself apart from its competition, said the firm. This, combined with HTP’s understanding of leadership DNA in the digital age, has enabled its team of consultants and partners to assess which candidates have the right combination of skills and attitude.

Hightech Partners also undertook a brand relaunch that included a new logo, corporate identity and website. “The rebranding was an opportunity for us to realign with our vision of executive search in the digital age,” said Bert Vermeiren, managing director. “Digital capabilities are no longer limited to ICT functions – marketing, operations, development, and many other core competencies of businesses must now engage digital solutions. We’ve long been a market leader in executive search for the ICT and tech industry, but now we are helping companies of all industries bring on digital-savvy talent for all departments.”

HTP’s efforts have already paid off: 2017 was a record-setting year in which the firm experienced growth of over 30 percent. Adding five new partners last year marks a considerable leap from the one per year that was typical in the past. The new partners will help serve the influx of new business that Hightech Partners has brought on, said the firm. Ten new clients, mostly from outside the ICT industry, were also added.

Mr. Lonbois joined Hightech Partners last year. Previously, he worked for 30 years at Accenture. There, Mr. Lonbois led the Belux practice, held various leadership positions in the resources market (energy, chemicals, utilities and natural resources) as well as health and public services markets in Africa, Europe, Latin America and the Middle East. He also led the technology practice for that region. He is currently on the board of various services companies.

Mr. Verbruggen comes to HTP with more than 30 years of experience in telecoms and IT. He began his career at Philips Telecommunications in Europe, followed by AT&T, where he held management positions in global competence development centers and sales. Then, Mr. Verbruggen moved to the Middle East as president and CEO of International Network Engineering, contributing directly to the implementation of network management systems throughout the country. After 15 years in telecoms’ infrastructure manufacturing, he switched to the operator world where he helped launch Telenet, a part of Liberty Global, as director of IT. After leaving Telenet, he joined KPN-Belgium as COO responsible for its technical departments.

Early in his career, Mr. De Groeve co-founded a successful niche payment processor venture and a New York-based technology company for online invoicing & receivables financing. Later, he took a senior position at SWIFT, where he was responsible for the global system integration & channel sales of the corporate messaging network. Mr. Verbruggen also worked for Oracle, in San Francisco, where he held a number of roles in financial services, managed architecture, implementation and sales of multiple technology platforms in fintech, logistics, IoT, cybersecurity and other industries. He has extensive experience working with F2000 clients and leading technology firms, including SAP, Oracle, Accenture, PWC and Softbank, among others. He specializes in scale-ups and large companies on industry 4.0 strategic initiatives and growth acceleration. Mr. De Groeve is also an advisor and board member to various start-ups

Mr. Tresca is an expert in fintech and digital transformation. He’s a founding member of Level39, Europe’s largest technology accelerator for fintech and future cities, and founder of StartupHome, a co-living community for entrepreneurs. He joined HTP to fill a gap at the crossroad between finance and tech. Having worked at both major corporations and small tech startups, Mr. Tresca aims to fill the present gap that financial industry is experiencing and help companies to avoid the obvious choice and hire the right person, with the right talents for the job, said the firm.

Mr. Roggero started his career in technology at Honeywell in 1980. He quickly moved through the executive ranks at Apple, Sun Microsystems and Siemens, eventually becoming CEO of Fujitsu Siemens Italy in 2000 and then CEO and senior vice president of Fujitsu Western Europe in 2007. In 2011, Mr. Roggero became CEO at Exprivia, a market leader in process consultancy, technology services and IT solutions, and then president and CEO at Ring Consulting in 2014.

Hightech Partners specializes in digital transformations. The firm leverages forward-looking methods such as Big Data analysis and artificial intelligence into the executive search process to help companies embrace new ways of working. HTP has offices in Brussels and Geneva, Switzerland with local partners across the major regions of Europe. The firm is also founder of ITP Worldwide, an alliance of specialized search and consulting firms in the technology industry in the U.S. and Asia.