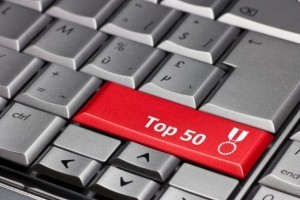 May 17, 2015 – Anyone taking the pulse of the headhunting industry today should look no further than the boutique bracket firms that make up this year’s “Hunt Scanlon Top 50 U.S./Americas Search Firm” rankings. A surge in growth among these players seems to support the notion that the senior talent industry’s sweet spot can be found in the middle of the pack. That isn’t to say the largest integrated talent solutions providers aren’t holding their own – and then some. Among the 10 largest U.S./Americas search firms, seven reported double digit growth rates in 2014. Among them, Caldwell Partners (up 33 percent), CTPartners (up 28 percent), Egon Zehnder (up an estimated 20 percent), Diversified Search (up 15.5 percent), Spencer Stuart (up 11.4 percent), Russell Reynolds Associates (up 10.4 percent), and DHR International (up 10 percent). Together, the Top 10 surged ahead 11 percent, collecting $2.230 billion in fees. By any measure it was a banner year for the top-ranked U.S. recruitment providers. And the coming decade could be its brightest.

But a look beyond the Top 10 reveals an even more competitive landscape. Midsized recruiting boutiques are up big – as a group they are growing at four to five times the rate of the Top 10. “We see this as a direct result of companies bringing their talent identification business in-house,” said Scott Scanlon, founding chairman of Hunt Scanlon Media and editor-in-charge of this year’s report. Mr. Scanlon says that clients are focusing on two things at the moment: efficiency and specialized search support. “Boutique players provide both,” he says.

As corporate talent acquisition professionals turn inward to recruit their own talent, the largest firms are certainly not being sidelined. Korn Ferry, Spencer Stuart, Heidrick & Struggles, Russell Reynolds Associates and Egon Zehnder are all rapidly innovating – expanding, and diversifying, their talent service models into high-end strategic consulting businesses. Organizational culture shaping and leadership assessment services are chief among them. Two firms, in fact – Egon Zehnder and Spencer Stuart – are building more science into their business models, developing competency-based testing tools and setting up proprietary methodologies to better assess and validate senior-level candidates as well as teams of people within client companies. “We see this as an evolutionary step toward the McKinsey strategic consulting model – but with people and leadership at the center of the consulting service,” said Mr. Scanlon. A look at the exceedingly high number of ex-McKinsey professionals now populating the rosters of these two firms bears this out.

“Predicting leadership success – not identifying leaders – is what we see as the next big opportunity ahead,” said Mr. Scanlon. “It is, unquestionably, the one with the most financial reward.” Not surprisingly, Egon Zehnder and Spencer Stuart enjoyed the highest growth rates among the Top Five U.S./Americas search firms, an expansion flowing from these new disciplines. For Egon Zehnder, the undisputed pioneer in offering integrated leadership services, a 10-year snapshot of its business is revealing: the firm reported $59.5 million in U.S./ Americas regional fees in 2004; today, that figure has skyrocketed to more than $250 million – a business overseen by nearly three times the number of consultants than a decade ago. But gaining marketshare has put Zehnder in the direct crosshairs of its rivals: Russell Reynolds Associates lured one of its top professionals, Justus O’Brien, to co-lead its integrated CEO and board advisory services group, while Rob Sloan jumped ship for global boutique firm Sheffield Haworth to head its integrated talent management service expansion.

But the industry’s compelling story, for now, rests squarely with the boutiques. Among them, No. 16 ranked True, founded by two former Heidrick partners in 2012 who sold a predecessor firm – Iron Hill Partners – to Heidrick seven years ago, reported the highest growth rate (90 percent) of any Top 50 search firm (see related Q&A: “Setting a New Course…”). With a laser-like focus on just two sectors, technology and life sciences, True embodies the focused, innovative, and passionate approach future search specialists are likely to emulate. Right behind True is ZRG Partners, up 45 percent – and another success story found among the Hunt Scanlon boutique bracket rankings. Like True, ZRG represents a new breed of talent management provider – smaller, more intensely focused, with global reach. But unlike any of its boutique rivals, ZRG is now one of the first mid-sized talent providers to obtain capital funding by using its growth story to attract investment dollars. ZRG plans to use the proceeds to pursue strategic acquisitions and attract key executive recruiters to fuel its growth. One likely outcome is that more mid-sized players will line up similar financing which, in turn, will push growth levels among this group to new highs. 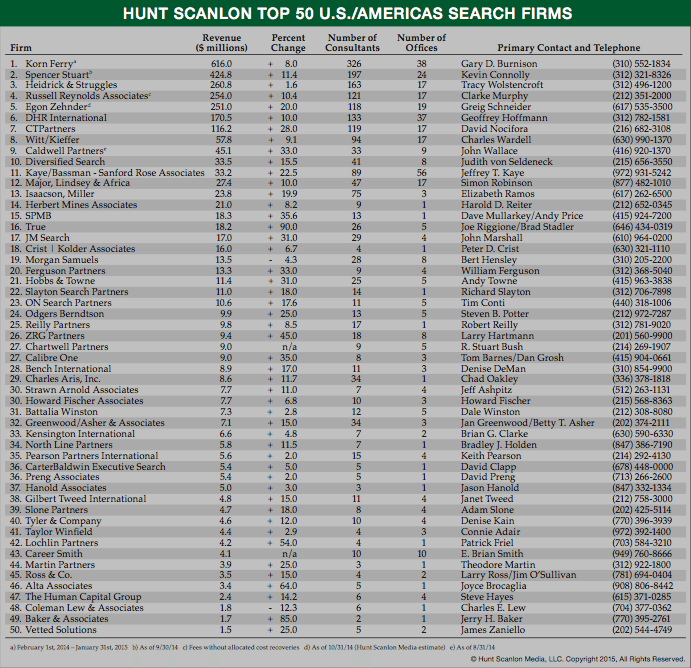