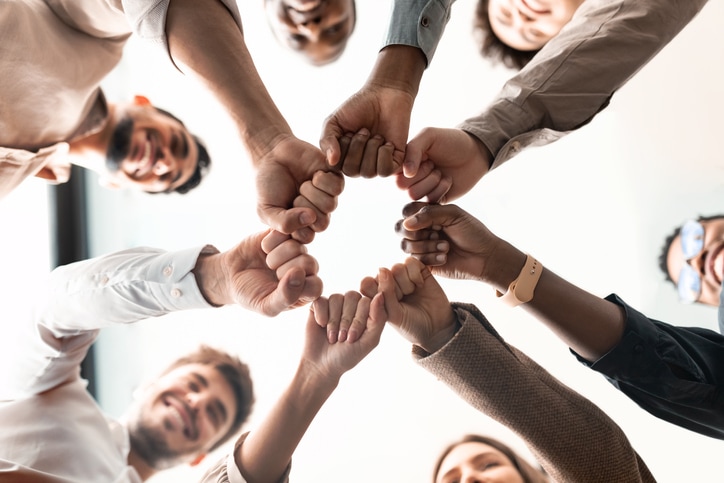 December 22, 2021 – The future of work will be different from the past. But the extent to which the future of work relies on HR leaders has also never been clearer, according to a new report by Russell Reynolds Associates’ Anna Penfold, Harsonal Sachar and Alix Stuart. The pandemic has accelerated a move to a distributed workforce, redefining the office as a hub for creative collaboration and social interaction rather than a daily destination, according to the report’s findings.

“The shape of the workforce is changing as well, with many leaders concerned about the availability of the skills they need to move strategy forward,” the Russell Reynolds report said. “At the same time, environmental, sustainability and social justice issues have risen to the fore, catalyzing new expectations of employers to take a stand on issues both inside and outside the organization.”

The report stresses that talent strategies must evolve to match future needs. HR leaders are now tasked with revolutionizing compensation and benefits policies and rethinking performance management systems to incentivize a hybrid and purpose-oriented workforce. “Deploying the right technology is a huge component of these efforts, as is applying a diversity, equity and inclusion lens to all talent decisions,” the Russell Reynolds report said. “Recent research on the future of work identified 21 new HR roles — including the future of work leader, gig economy manager and human bias officer — that will be necessary to help the workforce adapt to new realities.”

This evolution has major implications for the CHRO role, according to Russell Reynolds. The profile of a listed company CHRO is already starting to shift in response to the changing work environment. This is partly an agile response to lessons learned throughout the pandemic and a smart way to prepare for its lingering effects. Russell Reynolds says that the question that all leaders must confront, however, is whether today’s CHROs are ready for tomorrow’s challenges. The Russell Reynolds report offered leadership considerations for future CHROs:

Trend 1: More than half of recently appointed CHROs have previously held the role, as organizations flock to safety in times of crisis.

Future implications: While an experienced CHRO may be a safe choice, their preferred playbooks may not meet the organization’s changing needs. “As the structure of work evolves, the CHRO’s remit increasingly will include deep technology expertise to enable a distributed workforce along with the ability to speak the language of social justice and manage difficult conversations,” the Russell Reynolds report said. “This means CEOs and boards must redefine what experiences and skills a CHRO needs to best serve the organization. While past experience in the role will always be an attractive criterion, it is important to look beyond pure experience and consider the personal attributes, or competencies, that a candidate can bring to the role.”

Future implications: As talent becomes an even higher priority, it will be essential to include it in development plans for high-potential HR professionals. The report says that talent is not only one of the most strategic elements of HR, it is also one of the most likely to be on the board’s radar, which helps future leaders build important connections. Looking more broadly, rotations for high-potential HR talent should also include HR analytics and other data and technology-oriented roles to prepare for a future CHRO job. 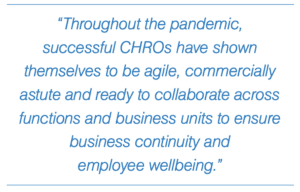 Trend 3: The majority of FTSE 350 CHROs are women, providing gender balance to many C-suites.

Future implications: As more companies look to add gender diversity via the CHRO role, they risk over-relying on a finite pool of experienced female candidates, according to Russell Reynolds. This points to the need for better, more proactive succession planning for the CHRO role, and more broadly, across the C-suite, an issue that more than 60 percent of executives identified as an area of weakness for their leadership teams in the 2021 GL. Better succession planning means starting the process earlier and launching internal development efforts as well as external market searches to maximize the number of qualified candidates. As other roles start to see higher levels of diversity, the CHRO role will be under less pressure to be the (sometimes sole) representative of C-suite diversity.

“Throughout the pandemic, successful CHROs have shown themselves to be agile, commercially astute and ready to collaborate across functions and business units to ensure business continuity and employee wellbeing,” the Russell Reynolds report said. “In the wake of massive disruption, organizations have a unique opportunity to re-make and re-tool with the goal of performing better in the future. As organizations look to hire and develop their next HR leaders — as well as other C-suite executives — it is critical to take a fresh view of what the organization requires from the role and who is best suited to fill it. As recent CHRO appointments converge around certain characteristics, leaders would do well to take them into account, while also considering more broadly the requirements for success in the role over the next five to 10 years.”

How CHROs can Prevent Top Talent from Leaving