Menu
View our Events
Stay Connected:
With more states and cities lifting restrictive business measures amid a decline in the number of coronavirus cases, the jobs economy continues to show signs of improvement. Let’s take a look inside the latest jobless claim figures released by the Department of Labor this morning. Will Hunsinger of Riviera Partners then weighs in! 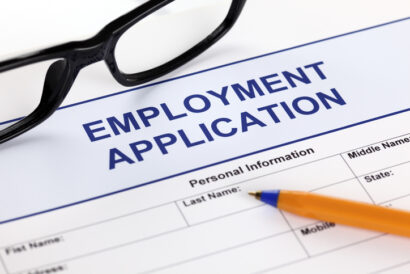 April 15, 2021 – The Labor Department reported this morning that 576,000 Americans filed new claims for state unemployment benefits. This is the lowest level for initial claims since March 14, 2020 when it was 256,000. The previous week’s level was revised up by 25,000 from 744,000 to 769,000. Economists surveyed by Bloomberg expected 700,000 filings. Since last February, the United States has lost over 10 million jobs. While the number of weekly claims remains inordinately high by historical means, the trend is falling now that the U.S. economy continues to reopen and close to three million Americans receive vacations each day for COVID-19.

The drop in claims comes after employers adding 916,000 jobs in March, the most since August, in a sign that a sustained recovery is taking hold as vaccinations accelerate, pandemic business restrictions are lifted in many states and Americans appear increasingly willing to travel, shop, eat out and otherwise spend again. The unemployment rate fell to six percent, from 6.2 percent, less than half the pandemic peak of nearly 15 percent.

The March jobs report offered a look at just how strong the U.S. recovery can be, Federal Reserve chair Jerome Powell said Wednesday. The economy is now at an “inflection point,” and Americans should stay vigilant as vaccination and reopening boost activity. “We’d be wise to keep wearing masks and being socially distant, at least for a while longer,” he said in a video interview with the Economic Club of Washington, D.C.

“Overall, the latest claims data have been improving lately, with a downward trend reported since early in January that generally has coincided with vaccine distribution and a reduction in new COVID-19 cases,” JPMorgan economist Bruce Kasman wrote in a recent note. “Initial claims did jump in the latest weekly report, but the four-week moving average for regular state filings hit its lowest level in over a year.”

Will Hunsinger is the CEO of Riviera Partners, a global recruiting firm specializing in the technology industry. The firm provides clients with optimal placements by combining recruiter interactions and experience with data-driven findings about candidates.

He recently sat down with Hunt Scanlon Media to discuss the pandemic, hiring, and how his firm has adjusted to working with clients and candidates during these difficult times. Following are excerpts from that discussion.

Will, when do you expect the economy to turn the corner and get back to something resembling normal?

Parts of the economy, like the technology sector, where we focus, turned the corner in the fourth quarter of 2020. These sectors have accelerated at an incredible, beyond “normal” pace throughout the first quarter of 2021. Obviously, other sectors such as hospitality were hit much harder by the global pandemic and face prolonged recovery, highly dependent on external factors such as the lifting of governmental restrictions and vaccine rollout. Based on the current pace, we expect to see a broader recovery in the third or fourth quarter of this year.

What expectations do you have for the search industry for the rest of the year ahead?

We expect to see continued outsized demand in our specialization areas – software engineering, product management, and design. There has been virtually no change to the talent supply versus demand dislocation we experienced before the onset of the pandemic. If anything, the shift from in-person to virtual work has exacerbated the gap and created more urgency to acquire technology talent. We expect search firms serving other sectors to track more closely to re-opening and may not see the same type of demand rebound until later in the year.

“Parts of the economy, like the technology sector, where we focus, turned the corner in the fourth quarter of 2020. These sectors have accelerated at an incredible, beyond “normal” pace throughout the first quarter of 2021.”

What are the issues that your firm faces that keep you awake nights?

Making sure that our people – at all levels – are fully supported. We have an incredible team running a marathon at a sprint pace, and at the rate that the industry is moving, we want to give our team the tools to be successful both professionally and personally. Our team has been amazing, adapting to the new challenges that virtual work has presented without skipping a beat. We strive to ensure that despite not working in the same physical space, our teams feel connected.

What sectors are strongest right now?

Tech is obviously strong, as venture and private equity capital deployment into innovation has accelerated. Beyond tech, the dynamic we are seeing is strong demand for the technologist function, regardless of sector/industry. Companies recognize that technology and technology enablement are both critical to create and maintain a competitive advantage. Companies need to continue to think differently about the type of transformational talent required to effectively execute their strategies.