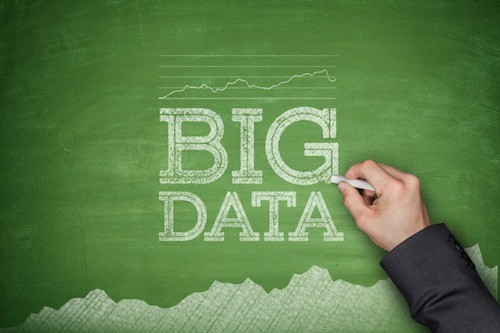 May 27, 2013 – An explosive new recruiting mandate is emerging for executive search consultants keen on offering innovative expertise to their clients and finding new avenues to growth: finding leaders who can inspire and direct companies in the digital age. It is the latest directive to be placed in the lap of executive recruiters by companies eager to stay ahead of their rivals and, more importantly, to stay ahead of the rivals they can’t yet see. Of course, the convergence of the static world with one that is online – which digital leaders oversee with increasingly sophisticated strategies and state-of-the-art technologies – is nothing new. In fact, the top job of chief digital officer goes back at least more than a decade. What’s changed is the entrepreneurial shift taking place at companies which have lived in that static world for their entire, buttoned-up lives and the new ways in which they capture, manage and use data for non-technology purposes. As they rush to digitize their businesses, they are turning in droves to executive recruiters who are more than eager to help them cross the digital divide.

The search industry’s fifth largest global recruiter, Russell Reynolds Associates, is one search outfit a number of companies are turning to for digital leadership assessment and recruiting counsel. In 2010, just as the recruiting industry started slowly pulling itself out from the great slowdown in global hiring, the firm noted rising demand for chief digital officers and three other related top positions. In short order, that demand shot up and Reynolds began receiving more and more requests from companies seeking digital specialists, with a new directive: identifying digital visionaries to sit on corporate boards. By late last year, demand for digital leaders became pronounced: more than 500 digital searches had now been executed by the firm. Clarke Murphy, Russell Reynolds’ newly-installed chief executive, knew that he had stumbled upon what could become one of the fastest growing and richest sectors he had seen in his 25-year search career at the firm. (See Exhibit 1: One-to-One Exchange with Clarke Murphy)

Today, Russell Reynolds Associates has 72 industry and functional experts dedicated to finding digital leadership for clients on a global basis. Thirty percent of its global team of recruiters now consider themselves devoted digital practice team members energized to identify, assess and recruit digital candidates. Within the last six months a newly created ‘digital transformation’ search practice has been conceived at the firm; it is the single largest, dedicated digital recruiting initiative among the firm’s chief rivals. Business is heavily weighted to the U.S./ Americas market (half of the firm’s team is based in that region), but requests from Europe and Asia are increasing. Mr. Murphy was tapped last year for the CEO role at Reynolds for his aptitude in inspiring collaboration. It was a fortuitous choice: it is the teamwork of industry and functional specialists within Russell Reynolds that is turning the firm into an overnight powerhouse in digital leadership recruiting. 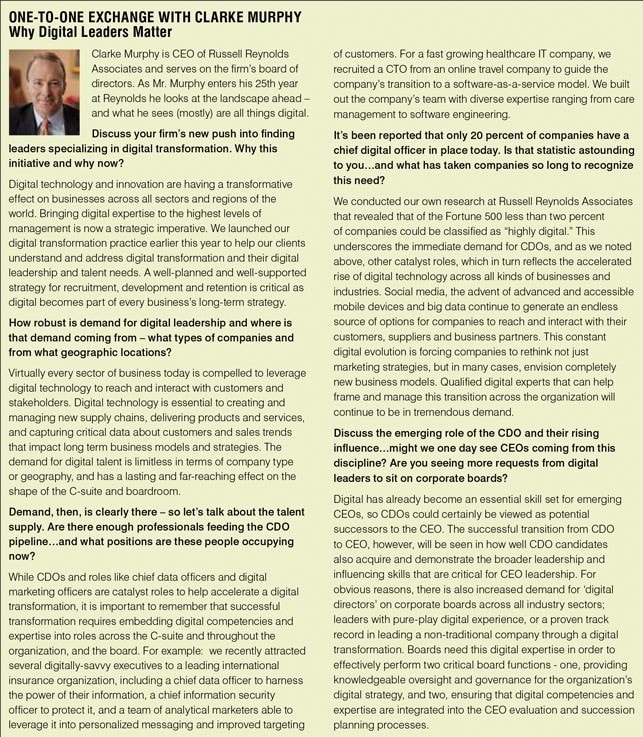 According to various market research reports less than 25 percent of companies currently have a CDO on staff. That deficiency, taken with the high turnover rates of chief digital officers and the digital specialists working in CDO ‘feeder’ positions, helps to explain why executive recruiters see this burgeoning field as their new sweet spot. And a doubling in CDO salaries in the last 36 months has only further electrified the search industry: pay levels for the most sought after CDOs can top $600,000 a year.

Aside from Russell Reynolds Associates, Egon Zehnder is well-positioned for digital work in Europe and Asia when the burst of activity in finding global digital leadership occurs there; the firm is already handling rising demand in the U.S. Spencer Stuart is also said to be taking on more assignments at the digital and data chief levels which complements its existing chief executive and director-level search work.

And of course smaller players are emerging and they are quickly developing capabilities of their own, or joining forces with more established recruiting providers. David Mathison, who curated the inaugural Chief Digital Officer Summit in New York recently, has now founded The CDO Club, a large network of digital professionals. Mr. Mathison is planning to deliver original research, publish special reports, curate events, create a job board and provide executive search expertise to help companies find exceptional digital talent. He is also about to name several recruiting partners to meet the demand that he cannot handle. According to Mr. Mathison’s research, there are about 300 chief digital officers sitting in position today; two years ago he said that number was 75. “I’m seeing about one new CDO being hired by a ‘major’ organization somewhere in the world every day,” he said – almost 90 percent of them in the U.S. Why now? “Digital disruption,” said Mr. Mathison, “is no longer limited to the music or publishing industries; it’s now happening at a more rapid pace in almost every industry. CEOs have come to the realization that digital is not going away and if they don’t adapt and even disrupt their companies now the only thing ‘going away’ will be their own company.”

The search for digital leaders is a bright spot for the recruiting industry, illustrating the value executive search providers can bring to well-worn brands that have discovered their own limitations as they forecast where they need to be and to a host of companies that might be new to talent acquisition, like e-commerce startups. The hunt for digital leaders is a complicated business. As CDO pioneer, Roger Wood said in the report sidebar Q&A: “Chief digital officers are transformative figures and they can change the destiny of an entire company.” These are visionary leaders, in many cases brought in to develop much needed digital revenue streams. More importantly, these leaders incubate new ideas and harness the scale of their companies – they are leading the biggest-ever migration in business. It is likely to be one of the most challenging and exciting sectors of executive recruiting to come along in years. Finding the world’s most influential leaders could be where executive recruiters find themselves and prove their true value.