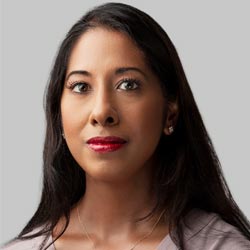 Sandya is a Senior Director at ECA and works with clients to fill both full-time and interim or project-based roles. She leads ECA’s Technology practice and supports clients across the Tech industry. Prior to ECA, Sandya worked in a variety of industries, with a mix of social sector work including Teach for America and Ashoka, Professional Services, including investment banking at Lehman Brothers and management consulting at McKinsey, and time in industry at Walmart eCommerce and Meta, working within the cross-section of Retail and Tech in both businesses.

Led Go-to-Market for the expansion of Facebook Shops and Marketplace to eight new major markets
Launched Services product within Facebook Shops and Marketplace
Led Content Strategy for work to define the “out of the box” software content available on the Facebook Portal
Led the launch of RetailLink for Walmart eCommerce, launching the first database accessible across the Stores, DotCom and Suppliers since the launch of Walmart.com
Ran the Category Management program on behalf of the Chief Merchandising officer at Walmart eCommerce
Led the Long Range Planning process for the eCommerce organization and the Category Management program
Key writer of McKinsey Global Institute paper, “Tale of Two Mexicos”
McKinsey Global Institute research fellow, key writer of Tale of Two Mexicos, A report published March 2014.
Designed and launched first episode-based payment model for primary care in the nation as part of statewide healthcare reform pilot. Model was replicated in >four additional states
Led restructuring effort at urban hospital in Los Angeles by identifying $12M in potential cost savings and growth to EBIDA, and realized $4M of $12M savings through improvements in labor costs within 4 months.
Analyzed short and long-term financial implications of the Affordable Care Act for an Academic Medical Center and evaluated potential acquisitions in the local market