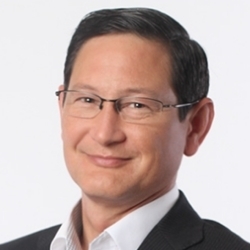 Years in Executive Search: 20+ years in the global technology market based in Silicon Valley.

Functions Served: CEO, C-level and Board executives in engineering and operationally-driven environments.

Organizations Served: Public, private and high-growth companies producing physical assets. If the product is technology-enabled and affected by gravity, then it’s right up my alley … the more esoteric, the better.

A curious technophile, Mike began his career as a systems engineer with IBM Labs in Toronto, where he worked on early-stage distributed computing services.

Spent seven years in management consulting with EDS and Accenture, where he focused on technology strategy and services design and delivery.

Prior to entering executive search, Mike held the position of vice president of operations at two early-stage startups, one in the e-Marketing field and the other in India-based offshore systems development.

Mike earned a degree in electrical engineering from the University of Victoria in Canada and is a former registered professional engineer in the province of Ontario. Holds an MBA from UCLA’s Anderson School of Business Management.

An American who is culturally Canadian, Mike enjoys surfing around the world with his wife, Debi, and cultivating a rich life in northern California wine country.