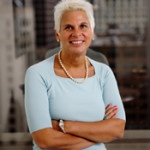 Accounting for more than 25 years of management experience with nonprofit agencies, Jane Luiso has held positions in the arts, education, association management and the social service sectors.

Ms. Luiso was a Principal for Kittleman & Associates, a national executive search firm dedicated to the nonprofit sector, for six years. Prior to joining Kittleman, Ms. Luiso was the Principal of JSL Consulting, a nonprofit executive search firm serving clients in the foundation, cultural and social service fields and she also served as a consultant in Madrid, Spain for the University of Chicago Graduate School of Business Executive Program in Barcelona. For a significant portion of her career, Ms. Luiso was associated with The Anti-Cruelty Society in Chicago, one of the country’s leading humane societies. She began as the Society’s first Director of Development in 1986 and assumed the position of Executive Director in 1992.

During her tenure, Ms. Luiso doubled the agency’s endowment and was responsible for numerous building and renovation projects including the Society’s Education & Training Center. She also served as the Administrative Manager of the National Association of Bank Women Foundation, an agency dedicated to the education and professional development of women in banking where she oversaw a multi-million dollar capital campaign.

Ms. Luiso began her career in development at the Chicago Symphony Orchestra as the first Director of Prospect Research and eventually became the Director of Corporate Relations, raising annual fund gifts from Chicago’s major corporations. Ms. Luiso continues to remain active in the community through her relationships with The Society of Animal Welfare Administrators.

She is the past Chair of the Development Committee for the National Council on Pet Population Study and Policy and a former member of the PETsMART Charities Advisory Committee. She holds a Master of Business Administration degree from the University of Chicago Graduate School of Business and a Bachelor of Science degree from the College of the Holy Cross, Worcester, MA.