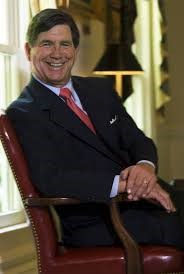 Dr. Daniel S. Papp retired as President of Kennesaw State University in 2016. During his 10 years as KSU President, he led the consolidation of KSU and Southern Polytechnic State University, making KSU one of the fifty largest public universities in the U.S. with over 35,000 students and 3,000 faculty and staff.

Dr. Papp has been Visiting Professor at the Western Australia Institute of Technology in Perth and Visiting Professor at Fudan University in Shanghai. He led study abroad programs to the Soviet Union, France, Germany, and Italy, and served as Senior Research Scholar at both the Center for Aerospace Doctrine of the U.S. Air War College in Montgomery, Alabama, and the Strategic Studies Institute of the U.S. Army War College in Carlisle, Pennsylvania. The U.S. Army twice awarded him the “Outstanding Civilian Service” medal.

A Phi Beta Kappa graduate of Dartmouth College, Dr. Papp earned his Ph.D. in International Affairs from the University of Miami. He authored or co-authored seven books on U.S. and Soviet/Russian foreign policy and international relations, and edited seven other books including former Secretary of State Dean Rusk’s autobiography, As I Saw It. He has published 80 other journal articles and chapters in edited books.

Dr. Papp’s previous community activities include serving as captain of both the Miami and Atlanta Rugby Football Clubs, and coaching youth basketball and football programs.Dr. Papp and his wife Sue live in Marietta, Georgia.They have four sons, William, Alexander, Michael, and Benjamin, and five grandchildren.