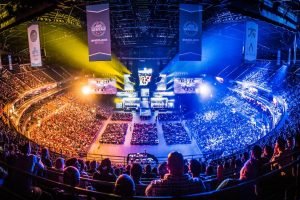 January 25, 2017 – Prodigy Sports, a nationwide leader in top level sports recruiting, has started up a new practice dedicated to sourcing, identifying and placing senior executives in the fast-growing field of eSports, a form of competition that is facilitated by electronic systems, particularly video games. The practice will be based out of the firm’s New Jersey office.

“We have such a wide number of clients in professional sports, from teams, management, agencies, technology companies, governing bodies, all of whom have called and asked about a path to growth in eSports as they start to get into this relatively new business, so we are pleased to be one of the first search firms to devote time, effort and manpower to matching opportunities and personnel in the space,” said Scott Carmichael, founder and chief executive officer of Prodigy Sports.

The need for a new dedicated recruiting practice, said Mr. Carmichael, was driven largely by existing mainstream sports business clients who have been acquiring or partnering with eSports properties. “These companies, many of whom are already working with Prodigy Sports, have a fast-growing need to have skilled people help manage these businesses as they mature,” he noted. To meet the demand, Prodigy Sports extended its staff to eight professionals at the beginning of the year, thereby broadening its knowledge base, and network, in the eSports field.

“Any mature business dedicating resources to eSports needs to be able to identify and source leadership like they would for any other area of their organization,” Mr. Carmichael added. “While eSports may be a new and fast-growing business to many, its challenges are not new, and we are looking forward to be able to marry the needs of those entering the field with a deep, diverse and unique database that we are always building.” He said his firm’s successes over the past 10 years lend well to eSports, especially as the line between eSports and professional sports organizations worldwide becomes more blurred.

“As eSports further integrates with some of the world’s most valuable sports franchises, there will be a rapid enhancement of the eSports business, particularly as it enters the consciousness of a much broader fan base,” said Mr. Carmichael. The result, he added, “will be a further explosion of the exponential revenue that we’ve already started to witness in the sector.”

With over 60 years of experience in the sports & entertainment business, Prodigy Sports has established itself as one of the search industry’s leading specialist boutiques focused on the sector. The firm has placed hundreds of candidates into a variety of business functions and roles within organizations, representing all disciplines, including senior management, sales, marketing, operations, and administration.